Miracast Streaming Support Is Finally Coming To Xbox One

Microsoft is finally enabling Miracast support on the Xbox One. This means that Microsoft’s latest gaming console will not be limited to streaming individual files from a Windows PC anymore, but will now include support for platforms such as Window Phone and Android.

With this new update, which is being targeted at the SmartGlass preview app for Xbox One, Miracast support will be added to the console, whereby Android devices, Windows Phone devices, and Windows PCs will be able to cast photos and videos, straight to the console. The update to the SmartGlass app will also allow users to switch the console on or off, in addition to the streaming feature.

Other than the addition of Miracast, Microsoft is also pushing out a bunch of other updates to the Xbox app for Windows 10. The new updates are bringing in improvements such as the addition of a new Game bar which allows gamers to easily capture clips and take screenshots of games. This is the same Game bar which was revealed on the Internet somewhere back in January. Additionally, the experimental live TV streaming feature is also being released – as a preview – giving Xbox One owners the ability to stream TV content to tablets, phones and PCs as long as they have access to a digital TV tuner.

Microsoft is yet to introduce support for streaming games being run on the Xbox One through the Xbox app for Windows 10; something that the company is currently working on. Meanwhile, the Xbox One has received a new streaming option in the dashboard which appeared earlier this month, but the feature which is in its beta state, and the Xbox app for Windows 10 does not support it for now. 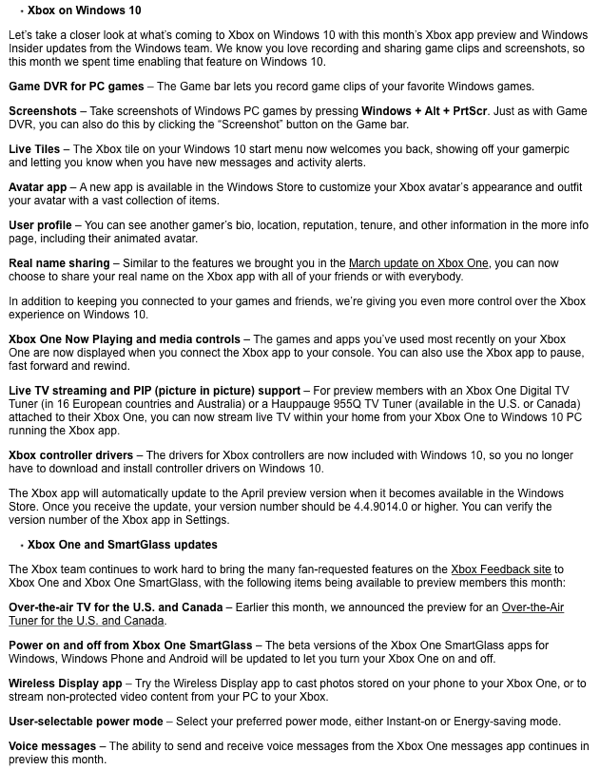 It was in late January when Microsoft unveiled this new game streaming feature at an event, showcasing Forza Horizon 2 being streamed from an Xbox One to a Microsoft Surface tablet, and it is likely that once Windows 10 is officially launched, the streaming feature will swing into play pretty soon, maybe even at launch day.