Microsoft takes us on a journey into the future in another one of its Future Vision videos, this time targeted at productivity. A pretty cool video, I wouldn’t advise anyone to hold their breath over getting hands-on experience with such tech any time soon. Head over the jump to see what Microsoft sees the computing future as.

Almost a year back, Microsoft released a similar video announcing the company’s vision of the future, which included a bunch of intuitive sensors and big screens in our houses and workplaces. Not much has changed since then, with Microsoft still obsessing over gigantic displays and some uber smart sensors, but the software giant does goes onto paint a world where all displays have become paper thin, holograms are no more a Star Wars fantasy, 3D printers are a basic commodity, and since the displays have become ultra-thin, they can now be bended like pages of a paper magazine. 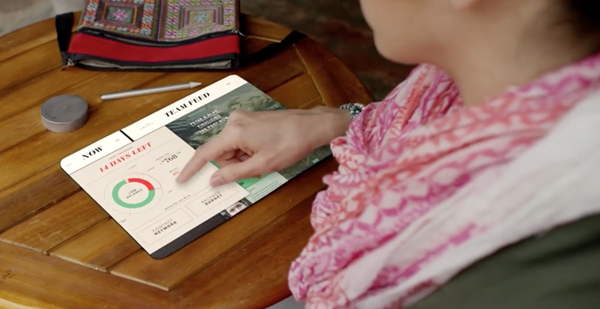 The video does show a tablet folded like a book – or a magazine – turning into a larger device, offering a bigger display as the user flicks and swipes away, interacting with an interface that is as natural as it comes. All this obsession with thin displays of all sizes has led Microsoft to have a go at the wearable devices as well, with a smart-band that wraps around your wrist like a watch with a display extending around the wrist. The band can then be straightened out turning it into a remote to interact with a giant display, which if you watch the video, could easily redefine our desktop PCs or for that matter, even our desks.

There’s a heavy focus on the seamless and intuitive controls on offer, be it a tablet or a wall-sized display, where the future is filled with swipes and gestures using natural hand motions. As for the future of audio, what tricks does Microsoft have up its sleeves for the next ten years? This is one area the video does not really touch upon, but perhaps we might be taken through that next year.

For now, we would really love to get our hands on that smart-band if it’s to be expected in the next decade or so.