Microsoft has demonstrated a robotic receptionist that could possibly be the future of all receptionists. The robot has facial recognition capabilities and can ask a person where he/she wants to go after detecting their faces.

The Demo was shown at the Financial Analysts Meeting as a part of Mundie’s presentation. According to CNET.

Chief Research and Strategy officer Craig Mundie on Thursday demonstrated a software-based robot that uses a combination of visual and voice recognition as well as speech synthesis to handle basic tasks. Microsoft itself plans to use the software robot to handle shuttle requests in its own buildings, which typically have a pair of receptionists to handle visitors and shuttle requests.

“This is what a natural user interface is all about and it won’t be just a receptionist,” Mundie said. “This is just the tip of the iceberg.”

Microsoft had entered the Robotics race more then a year ago. It released Microsoft Robotics Studio, which is a Windows-based toolkit designed so that commercial and individual developers can create intelligent applications for a range of products. Tandy Trower, general manager of the Microsoft Robotics Group had said,

We hope to put in place the basic plumbing layer to help people get started (creating) robotics applications, and allow third parties to bring their hardware and software to share with everyone.

According to Mundie, ”FY 09 will round out the story with some significant announcements”. A lot is expected from PDC 2008 taking place in October in Los Angeles, which includes information on Windows 7, new developer technologies as well as the cloud computing initiative taken with Live Mesh to expanded further towards developers. 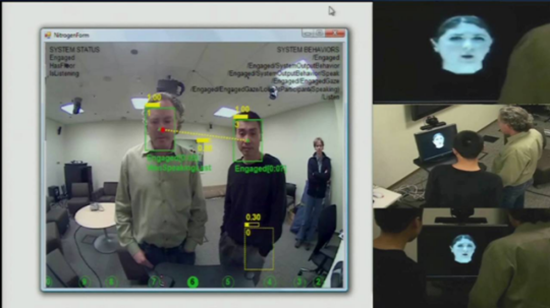