It would appear that Microsoft has accidentally outed its own iPad Touch Cover keyboard case by including it on a web page dedicated to “Lithium Battery Transportation Documents” detailing instructions on transporting devices made by the company that contain said batteries.

Last updated in April, the page now includes an entry for an “iPad Touch Cover (Model 1719),” which has not yet been announced or seen elsewhere.

At this point, we obviously do not know when the iPad Touch Cover will be released, or indeed if it will ever be released at all. It is possible that given the time that has elapsed since April’s web page update that the product no longer exists, and the only real information we have is that it includes a battery. That does, however, make it likely that the iPad Touch Cover is wireless and connects to an iPad via Bluetooth, although that is obviously unconfirmed.

Microsoft already offers a Surface Touch Cover for its own computers and if the naming convention does give us a clue, then it is possible the accessory could be just 3mm thick and feature pressure-sensitive technology for a full multitouch keyboard. 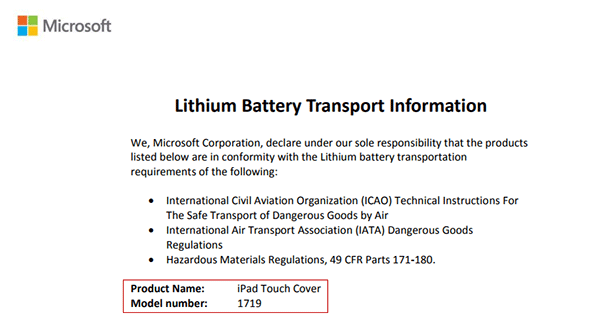 We are, of course, simply playing a big elaborate guessing game here however, so until we see Microsoft formerly announces the iPad Touch Cover keyboard case itself and tell us exactly what it is and how it works – at which point we will be sure to let you know – we can do little more than wait. If, however, Microsoft has subsequently cancelled the keyboard, that wait could turn into a very long one indeed! Still, all the unknown is what makes this industry so exciting, isn’t it?