Microsoft may be set to shake up the Windows Phone market by entering its own horse into a race that has thus far stalled, with a Surface Phone potentially on the horizon. Should rumors and a supposed benchmark result is to be believed, that is.

With the announcement of the Microsoft Surface tablet-cum-notebook, the software giant took its first tentative steps into making and selling of its own computers. While the company has made mice, keyboards and other peripherals for years, actual computers have been beyond it. Until now.

Having announced the Microsoft Surface would be with us this year, Microsoft appears to have turned its attention towards the smartphone market, if reports are to be believed.

A German website claims that a popular Windows Phone benchmarking app, WP Bench, has detected a new phone – one that is reported as the Microsoft Surface Phone. Could Microsoft be planning to release its own smartphone, running the latest version of the company’s mobile operating system.

The news that Microsoft could be set to launch its own smartphone is an interesting one, especially considering the close tie it has with Finnish hardware maker, Nokia. Having thrown its weight fully behind Windows Phone, Nokia has all its eggs firmly in Microsoft’s one basket, and it would presumably be disappointed to hear of competition from within. 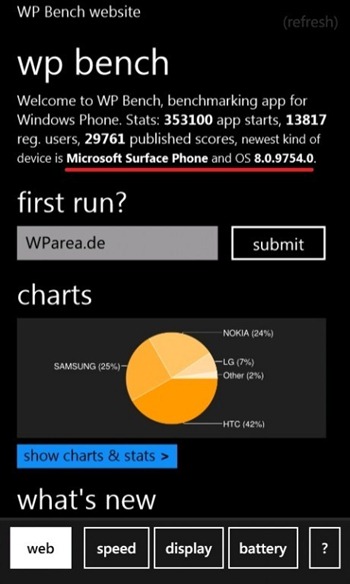 The likes of HTC, Samsung and LG will no doubt also be less than pleased to learn the news, either.

Of course, none of this is concrete proof that anything is afoot inside Redmond, and Microsoft’s partners may not need to worry. This is the first time we have heard of any Microsoft Surface Phone, but then again, there always has to be a first. Microsoft did deny working on such a phone back in June, but we’ve known companies to be less than truthful before!

As we have said on so many occasions before, time will tell whether this particular rumor has any legs, or whether it is just another dead end. We’ll be hoping that Microsoft is taking a leaf out of Google’s book by launching a reference design on which partners should work on.