Microsoft has just announced the Surface 3 tablet, which is a cheaper, slightly small and lesser capable sibling of the powerful Surface Pro 3. Thinner and much lighter than the Pro 3, head over the jump to check out more on Microsoft’s new offering in its tablet-hybrid lineup which also includes a truly important software change.

The Surface 3 has tackled that long standing issue that had always stared back at Microsoft, and that was the existence of Windows RT; the Surface 3 runs the full version of Windows 8.1 thanks to the move from ARM to the Intel Atom x7 processor. Users are now free to run apps like Chrome, Photoshop, iTunes, etc., which they would traditionally run on Windows 8.1 for the PC. 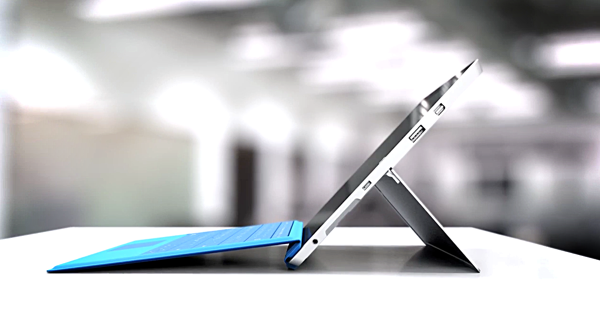 The Surface 3 may seem like an outright re-badged Surface 2 given the silver magnesium casing, that 10-inch display – which we’ll get to in a while – and a fairly similar thickness as well. However, the move from Windows RT to a fully functional Windows 8.1 experience is more than enough to throw the Surface 3 in a league of its own. While the Surface Pro 3 is clearly the powerhouse of the latest Surface lineup with its Intel Core i3, i5, and i7 choice of chips and up to 8GB of RAM, the Surface 3 isn’t shy of borrowing some features from the hybrid tablet. 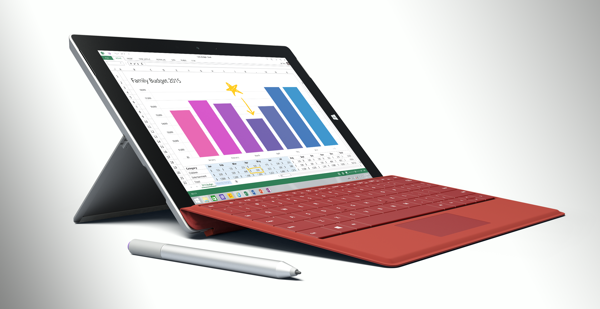 The 10.8-inch display has been given a new 3:2 ratio akin to the Surface Pro 3, though the latter has a larger 12-inch panel. According to Microsoft, “All that we did to make the Pro 3 screen one of the best in the industry is present in Surface 3, and you’ll appreciate this as you work and play on it.” Microsoft is also bundling a Surface Pen – stylus – just like the Surface Pro 3 which will gives users 256 levels of pressure sensitivity.

Microsoft is suggesting that the battery on the Surface 3 can last for over 10 hours on a single charge, but what is more interesting in all of this is perhaps the inclusion of a Micro USB port, which means you can charge the tablet with any modern day smartphone charger, though the included 13W wall brick would be a faster option. With a 3.5MP front facing camera, and an 8MP module at the back, both snappers are able to record videos at 1080p. 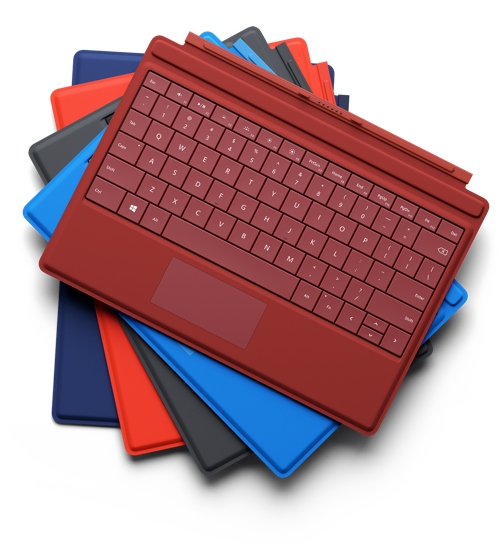 Pre-orders for the Surface 3 will commence from today, and the base model, which comes in with 2GB of RAM and 64GB of onboard storage can be grabbed for $499. Starting April 1, the tablet will be available for preview in every Microsoft Store. The tablet should be available for purchase widely starting May 5. Lastly, the Surface 3 will be upgraded to Windows 10 for free when it becomes available this summer. 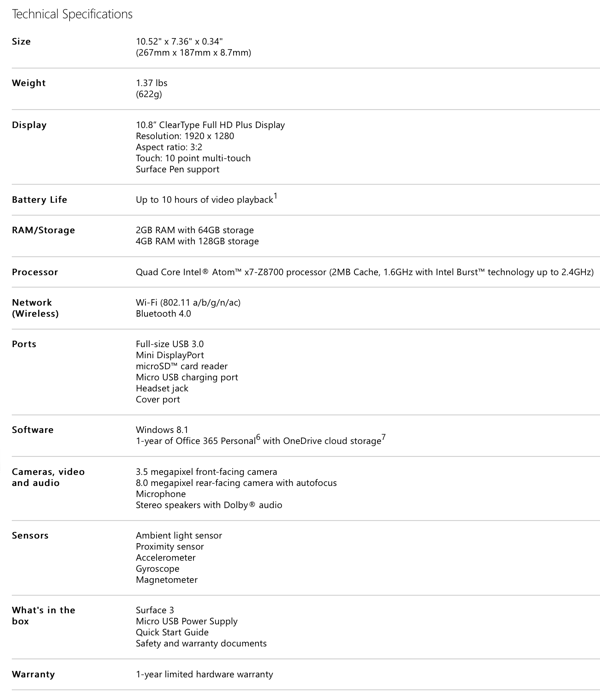