The ongoing patent disputes between Apple and Samsung are constantly subject to media attention, and at present, U.S. District Court Judge Lucy Koh has the unenviable task of listening to the argument regarding Apple’s U.S. Design Patents D558, D757, D618 and D678, related to the look and feel of its iDevice range.

Although both camps have worked extensively to put forth a strong argument, judge Koh hasn’t allowed either one of the consumer electronics industry’s titanic companies to feel as though they have the upper hand. During the preliminary injunction hearing back in October, Koh held the Samsung Galaxy Tab 10.1 and the iPad over her head at one point, asking lawyers from Samsung and Apple whether they could tell the difference between the two; to which court correspondent Dan Levine noted: "it took them a while to do so." 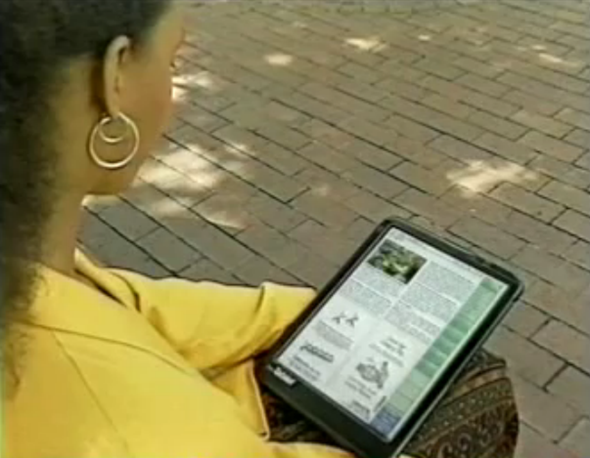 While the devices do indeed look similar at face value, Koh has pointed to a concept design from way back in 1994, which bears a striking similarity to both devices. The somewhat anachronistic footage, which sees newspapers read in much the same way as the can be with iOS 5’s Newsstand, predates the iPad quite spectacularly, and suggests Apple may just be a bit better at covering it’s plagiary tracks than the Korean company:

As Samsung spokesperson Kathleen M. Sullivan pointed out to the judge, there are numerous tablets and smartphones predating the popular iOS devices of the last couple of years, and believes the Cupertino company  is "seeking an unjust monopoly on rectangular smartphones and tablets with a flat surface and rounded corners", according to the report by Bloomberg Businessweek.

While Koh has suggested Samsung may have imitated Apple’s design, she also believes Apple may just as flagrantly have ripped off the above 1994 device introduced by newspaper publisher Knight-Ridder.

The case is still in progress, but Koh has no plans to grant a preliminary injunction against the sale of Galaxy devices based on Apple’s complaints, even if she does believe Samsung infringes them. As someone who has covered the Apple/Samsung debacle for way too long now, Koh seems like the breath of fresh air both companies need in order to bring themselves back down to earth. Companies have been copying each other for decades, and although Apple does have some grievances in this case, should Knight-Ridder not subsequently be entitled to a portion of iPad sales?