The horrendous and unforgivable acts of Esteban Santiago at Fort Lauderdale’s airport will never be forgotten or forgiven, and rightly so.

The tragic loss of life, as well as the countless number of lives and families scarred forever by the former member of the Alaska Army National Guard is nothing short of a tragedy and an unbelievably cowardly act, but thankfully certain individuals managed to escape unharmed, including Steve Frappier who potentially owes his life to an Apple MacBook Pro. 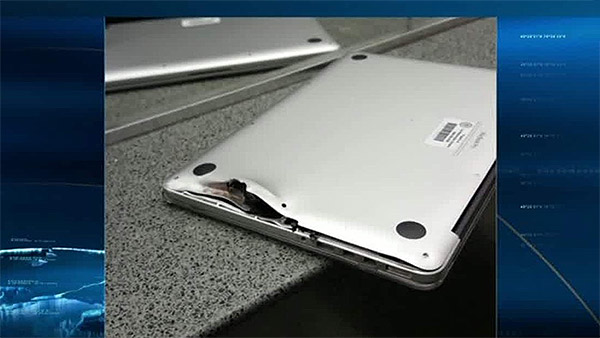 As part of an aftermath interview with CNN’s Anderson Cooper, eye-witness and survivor Frappier revealed that he was one of the lucky ones who managed to walk away from the incident, but also that he was actually shot in the back during the shooting at the airport.

Thankfully, Frappier had actually tried to escape the scene by taking cover in another part of the airport, putting himself into the prone position with his backpack on his back like a tortoise shell. Inside this backpack were a number of items, including his lucky-MacBook Pro.

Since I was on the ground like a tortoise you know with the backpack on me. The way that it ricocheted and entered my bag, that would have been my back.

It’s unknown if the assailant was actually intentionally aiming at Frappier, or anyone else in that vicinity of the airport, but the witness has shown off that MacBook Pro which has clearly borne the brunt of a stray bullet. The bullet appears to have entered the backpack from the rear, penetrated the MacBook Pro’s display, and carried on through to the side of the machine, eventually exiting through the device’s air vents on the side.

According to official inspection of the MacBook and Frappier’s bag, law enforcement agents have determined that the bullet likely entered the bag through a small opening, making direct contact with the Apple notebook. 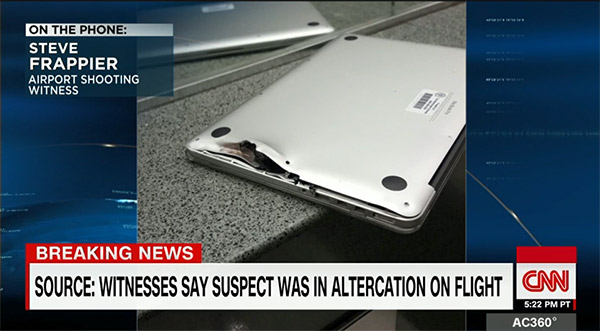 According to CNN, the assailant in this instance, Esteban Santiago, had previously been in contact with the FBI claiming to be hearing voices in his head, and was subsequently checked into hospital for a mental health evaluation, of his own accord. Our condolences and deepest sympathies go out to those affected by this tragedy.