MacBook Pro Users Complaining About Stage Light Effect And Blacked Out Display Issues, Are You Affected?

Do you even have a successful product unless owners are complaining of defects and issues? Apple has been feeling this pain recently and it doesn’t look like it’s going to end soon with a growing number of MacBook Pro owners complaining of “stage light effect” on their machines.

The issue isn’t affecting all users of all machines but does seem to be affecting a growing number of individuals who own a 2016 MacBook Pro or newer, and specifically those machines which have the gorgeous Touch Bar in tow.

Users are seeing concerning backlight issues, particularly from the bottom of the screen, which is typically referred to as “stage light effect” due to the fact that it looks similar to the lighting effect uses in theaters to illuminate the stage.

Repair website iFixit has undergone an investigative task and has shared some information relating to the cause of the problem, resulting in the company to come to the conclusion that the problem arrives from Apple’s decision to use “thin, fragile flex cables:”

When it first debuted, the design seemed fine. But as always, the devil is in the details. Apple opted for thin, fragile flex cables as opposed to the beefier wire cables used in previous designs that could be routed through the hinge instead of wrapped around it, helping mitigate the stress of repeated openings and closings.

It’s natural behavior for laptop users to be opening and closing the lid of the machine over time. With typical usage, this would happen several times a day at a minimum. Unfortunately, due to the quality of the materials used, it appears that integrity of the thin cables are breaking down, which ultimately can end up in them failing altogether which is when the stage lighting effect manifests itself at the bottom of the display. 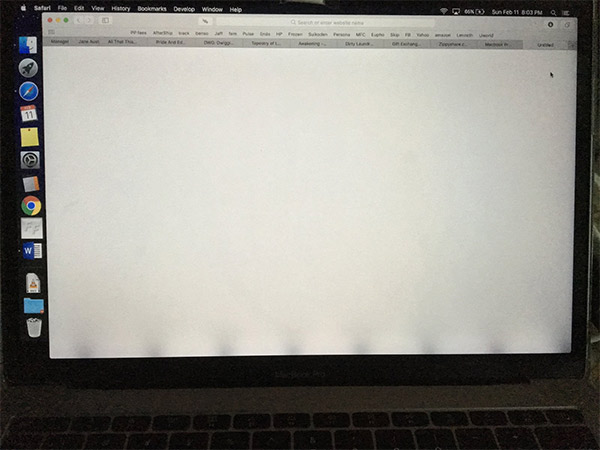 One would imagine that the issue could be easily resolved by taking the MacBook Pro to Apple and having the cables replaced and that it would be relatively inexpensive. That’s not the case at all due to the fact that the cables are part of the display meaning that the whole display unit needs to be replaced, resulting in a $600.00-plus repair cost. At the time of writing, Apple has not announced a repair program for this issue.

A video demo of the problem at hand can be seen below.