Apple today released OS X Maverick 10.9.3, after a considerable amount of developer testing. Having been given the build number 13D61, it is now ready to download from the Mac App Store, and you can catch all of the key details on this release right after the break.

Given that Apple’s Worldwide Developers Conference (WWDC) is nigh, we strongly anticipate that this will be one of the last public releases of Mavericks 10.9.x. We don’t, as yet, know what the next edition will be named – other than that it will probably follow a California theme – but we do have something of a clue as to the kind of changes that will be included. 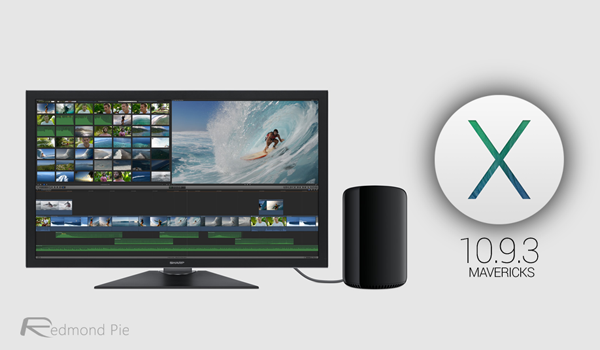 Following the significant update to iOS 7 last year, which saw the Cupertino’s mobile OS get a complete redesign, it is strongly suspected that the next major release of OS X will follow suit. After all, Apple is famed for keeping things as uniform as possible, and with several other enhancements also said to be in the pipeline, we’re eager to see what’s next as far as the Mac software is concerned.

All will be revealed, as aforementioned, at WWDC, which kicks off in early June. Along with OS X 10.10, Apple is also expected to take the wraps off iOS 8, and with plenty of great features said to be in the offing for iPhone, iPad and iPod touch users, the annual event looks set to be among the most memorable in recent years.

For now, though, it’s all about OS X 10.9.3, which those on compatible machines can download right now.  As well as pushing enhanced 4K support on the all-new 2013 Mac Pro (think: trash can) and 15-inch Retina MacBook Pro. You can also now better sync your contacts / calendars between OS X and iOS devices via USB, and with more reliable VPN connectivity, it’s the kind of incremental update that you won’t want to miss.

The OS X Mavericks 10.9.3 Update is recommended for all Mavericks users. It improves the stability, compatibility, and security of your Mac.
This update:
– Improves 4K display support on Mac Pro (Late 2013) and MacBook Pro with 15-inch Retina Display (Late 2013)
– Adds the ability to sync contacts and calendars between a Mac and iOS device using a USB connection
– Improves the reliability of VPN connections using IPsec
– Includes Safari 7.0.3

Along with the aforementioned, there’s also the usual spate of bug fixes and performance enhancements, and provided that your Mac is Mavericks-ready, you can now pick this update up from the Mac App Store.