The eccentric group of six anonymous hackers who collectively go by the name of LulzSecurity (or just LulzSec) have announced that they are ending their journey of lulz today. 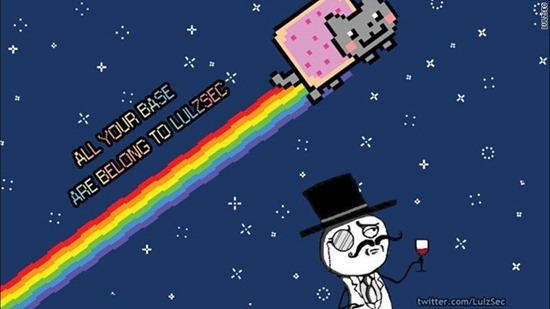 Despite categorically stating that they will continue leaking more data and target more institutions and companies to expose their racist and corrupt nature, LulzSec has announced that they are discontinuing their hacking activities.

It all sounds very suspicious, if you ask me. The torrent file they uploaded on 24th June stated, quite explicitly: “… 2 months of mayhem with more to come…”.

Yet, in today’s statement the words “Our planned 50 day voyage has expired”. Planned? I don’t think so! If it were planned, they certainly wouldn’t have said more to come in prior statements.

They targeted some of FBI’s affiliates a few weeks back. It is then safe to say that the FBI is after them and, realizing this, they may have decided to call it quits before they get into even deeper trouble.

LulzSec were behind the recent high profile cyber-attacks on Sony, Nintendo and CIA. Just yesterday, we wrote on their highly successful attack on Arizona Department of Public Safety’s website in which LulzSec released confidential data “for teh lulz”.

Here is the statement they released today in a torrent:

Friends around the globe,

We are Lulz Security, and this is our final release, as today marks something meaningful to us. 50 days ago, we set sail with our humble ship on an uneasy and brutal ocean: the Internet. The hate machine, the love machine, the machine powered by many machines. We are all part of it, helping it grow, and helping it grow on us.

For the past 50 days we’ve been disrupting and exposing corporations, governments, often the general population itself, and quite possibly everything in between, just because we could. All to selflessly entertain others – vanity, fame, recognition, all of these things are shadowed by our desire for that which we all love. The raw, uninterrupted, chaotic thrill of entertainment and anarchy. It’s what we all crave, even the seemingly lifeless politicians and emotionless, middle-aged self-titled failures. You are not failures. You have not blown away. You can get what you want and you are worth having it, believe in yourself.

While we are responsible for everything that The Lulz Boat is, we are not tied to this identity permanently. Behind this jolly visage of rainbows and top hats, we are people. People with a preference for music, a preference for food; we have varying taste in clothes and television, we are just like you. Even Hitler and Osama Bin Laden had these unique variations and style, and isn’t that interesting to know? The mediocre painter turned super villain liked cats more than we did.

Again, behind the mask, behind the insanity and mayhem, we truly believe in the AntiSec movement. We believe in it so strongly that we brought it back, much to the dismay of those looking for more anarchic lulz. We hope, wish, even beg, that the movement manifests itself into a revolution that can continue on without us. The support we’ve gathered for it in such a short space of time is truly overwhelming, and not to mention humbling. Please don’t stop. Together, united, we can stomp down our common oppressors and imbue ourselves with the power and freedom we deserve.

So with those last thoughts, it’s time to say bon voyage. Our planned 50 day cruise has expired, and we must now sail into the distance, leaving behind – we hope – inspiration, fear, denial, happiness, approval, disapproval, mockery, embarrassment, thoughtfulness, jealousy, hate, even love. If anything, we hope we had a microscopic impact on someone, somewhere. Anywhere.

Thank you for sailing with us. The breeze is fresh and the sun is setting, so now we head for the horizon.

Lulz Security – our crew of six wishes you a happy 2011, and a shout-out to all of our battlefleet members and supporters across the globe.

LulzSec hopes that their activities will spur others to join the AntiSec movement to ensure freedom for all.

The uploaded torrent also comes with internal data from AOL and AT&T, as well as data of over 550K+ Battlefield Heroes Beta gamers and 50K+ “random” gaming forums.