Customization is definitely one of the main reasons why mobile smartphone users prefer to have their needs handled by the fantastic Android operating system. Most aspects of customization are extremely popular within the Android community, but being able to replace the home screen with an alternative launcher setup is growing in popularity, partly thanks to developers who produce work like the lightweight and open-sourced LauncherAdvanced app which provides a great set of highly-configurable options to tweak the device.

One of the great benefits of being able to amend and replace this section of the Android OS is being able to improve performance, as well as add features that just don’t ship with the device, but are definitely needed or wanted by the end-user. The new LauncherAdvanced offering is one which tries to keep things simple, but still offers great functionality to Android users with blistering fast performance.

One of the great things about LauncherAdvanced is its open-source status, meaning that the source code is readily available for all to use and see, allowing users and developers to extend the package themselves to add in any functionality if they so desire. As it currently stands, the package allows users to have two different types of grid on their home screens as well as create, edit and remove folders that allows apps to be grouped together and organized efficiently.

The launcher also supports up to five different home screens, with the size of the docked app icons being configurable to suit the users’ tastes. It has also been extensively tested with most currently used versions of Android to ensure that it not only offers compatibility with those devices running it but that it also stays true to the lightning fast launcher speed that the package has been built around. Although the feature set on LauncherAdvanced may seen similar to other launchers out there, it does have support for anyADW theme that makes it a great launcher to have. 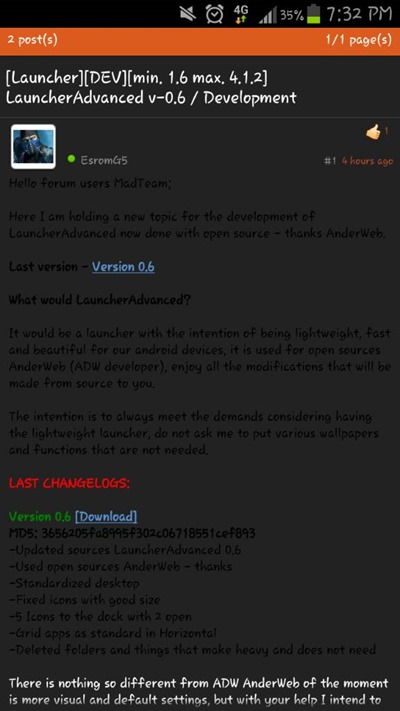 The support for ADW themes means that users who have previously been reluctant to switch launchers can now do so safe in the knowledge that they can keep the look and feel of their current setup, but with the addition of a little more speed and stability.