Ever wanted to be able to launch widgets and interact with your Android phone just by flicking it in a certain direction? Now you can, though the list of functions is a little smaller than we would perhaps like. Still, you can’t have everything in life can you?

One of Android’s biggest strengths is undoubtedly its extensive widgetation. We’re fairly sure that’s not a word, but we’re equally sure that it should be, so we’re sticking to it.

Being able to add widgets to an Android phone or tablet’s home screen is one of the features that has left some to claim that Android is the smartest of smartphones, and with iOS still apparently unwilling to catch up, they may have a point. The thing with those widgets, though, is that you have to tap them. In this age of motion-sensing games and being able to wave your hands at your TV to change channels, isn’t tapping a smartphone screen a little, well, 2011?

How about being able to interact with Android widgets using the flick of your wrist? That sounds awesome, right? Well, yes and no.

Flick Widgets allows you to do just that. Using the power of your device’s accelerometer, Flick Widgets lets you do a couple of different things depending on which way you flick it. Awesome.

Except, despite there obviously being at least four different directions that you can flick your trusty smartphone, Flick Widgets currently only supports two actions that can be assigned to those directions. You can alter the phone’s volume, and fire up your contacts list. Hopefully the ability to alter things like brightness is on the way – the app is after all built on the already available Brightness Motion. Surely it’s only a matter of time? 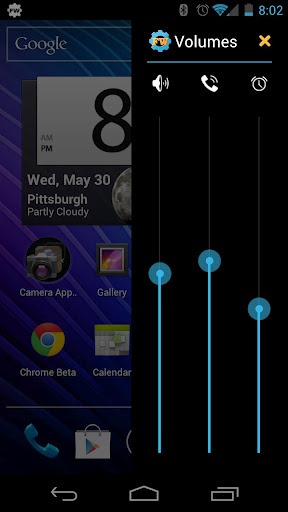 Flick Widgets is currently available for free so long as you don’t mind the ads which, let’s be honest, most of us don’t. If the thought of ads put you off free things then you wouldn’t be reading this now, would you?

Flick Widgets is off to a good start, and the infrastructure is certainly there, let’s just hope that the app’s developers get around to increasing its functionality beyond its current level of usefulness.