Popular jailbreak tool Redsn0w – compiled by the iPhone Dev Team – has just been updated with full support for iOS 5.1.1. You may have caught our tutorial, which detailed how one could jailbreak their device tethered using Redsn0w, although since it was a pre-iOS 5.1.1 release, users needed to "point" the tool to the older firmware.

Thanks to the update, though, no download of older firmware is required, and Redsn0w version 0.9.11b4 now fully supports iOS 5.1.1.

The response from the iPhone Dev Team has been a swift one, but we’d expect nothing less from a group of individuals as dedicated and talented as they are. The updates for Redsn0w have been arriving thick and fast of late, and even though no new jailbreaks or iOS versions have arrived for quite some time, the utility has been subject to much housekeeping and performance enhancements. 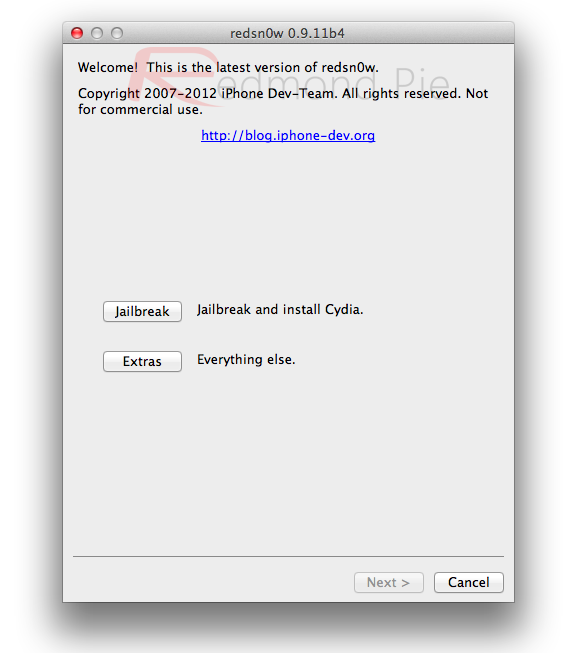 Of course, the jailbreak is still tethered, and is limited to A4 and below devices only (iPhone 4, iPad 1, iPod touch 4/3G, iPhone 3GS etc), and you can follow the step-by-step how to tutorial by following our jailbreak 5.1.1 tutorial, keep in mind that you have to skip steps 4, and 7, since Redsn0w now officially supports iOS 5.1.1 and will fetch the needed files on its own.

HDR wasn’t performing properly when the camera was initiated by the lock screen button, while AirPlay video playback and Safari bookmark syncing was also causing a few issues to some users, but after downloading and installing iOS 5.1.1, those problems should have disappeared.

It remains to be seen how far away a potential untethered jailbreak may be, and although the likes of I0n1c and Pod2g have made some exciting discoveries on iOS 5.1, and since, in jailbreak terms, iOS 5.1.1 seems to be essentially as you were, the chance of a fully-untethered JB remains possible.

Those running the new 3rd-gen iPad will undoubtedly be the keenest of any iOS user to see a jailbreak, and there are quite a few tweaks which, you feel, would run fantastically on that new Retina display. With a brand new, A5X processor added to the mix, though, it’s going to be a tough task, so we’ll have to be patient and let the trusted devs do what they do best.

We’ll be keeping you up to date with any significant news regarding the JB scene, so stay tuned to our coverage here at Redmond Pie!