Yesterday we reported on Apple releasing a firmware update for its Apple TV device, which brings a series of bug fixes in a rather run-of-the-mill release.

As is the case with iPhone, iPad and iPod touch firmware updates, the attention of users quickly turns to the feasibility of a potential jailbreak.

Much like the PwnageTool, Seas0nPass is a utility designed specifically for the 2nd-gen Apple TV which helps users to both jailbreak and boot Apple TV. Seas0nPass allows you to create custom firmware files for the Apple TV, rendering the jailbreak process relatively simplistic.

We’ve previously covered the method by means of tutorial on how you can successfully jailbreak your little black streaming device.

In keeping with the general theme of late, the jailbreak is tethered (for now), thus the device will need to be manually kicked into a jailbroken state each time it is rebooted / switched off. 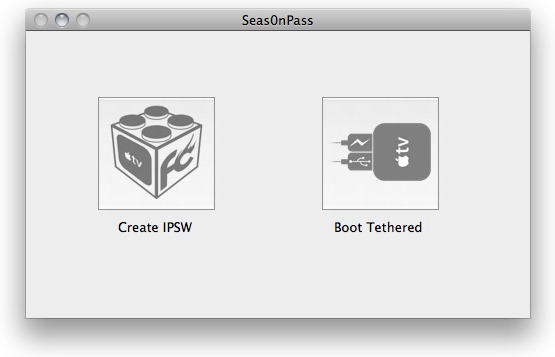 As is the case with many other iOS devices, the jailbreak allows a little more freedom and usability than the fruit company would permit. It opens the door to quite a few new possibilities  – from turning your Apple TV into your very own web server to running XBMC.

Before we get carried away, it’s not like jailbreak for those touch-based devices we know and love. There’s no Cydia, and there aren’t a million tweaks available to enhance the experience beyond our wildest dreams. That said, it’s a worthwhile venture, and certainly makes the Cupertino company’s first TV-centric effort a little more interesting.

It seems a matter of time before Tim Cook and Co. make television more than just a hobby, and aim the Apple harpoon directly at the connected TV market. As has been discussed in grave detail, pricing seems the only obstacle, although the high-end sums have done very little to stop Apple so far in its quest for total domination of the consumer electronics market.

For 99 bucks, Apple TV is arguably a very favorable device; it’s cheap, compact, and does a good job considering its limited feature-set.

Let’s hope, in future, the fruit company delivers something a little more exciting.

As aforementioned, those looking to jailbreak Apple TV on 4.4.4 should check out the step-by-step guide located here.