iWork For iCloud Beta Rolling Out For Non-Developers

Cloud-based productivity apps have long since been seen as the naturally progressive route of the industry, with Microsoft’s Office 365 having enjoyed a relatively successful launch since first hitting the scene earlier this year. Given how Apple’s flagship cloud service has quickly established itself as a secure, reliable and popular service, it was only a matter of time before iCloud and iWork joined forces in offering another dose of collaborative cloud fare, and the iWork for iCloud beta implementation has just begun rolling out to non-developers.

The feature, which had only previously been available to registered Apple devs, now looks to be trickling out to anybody with a valid Apple ID, as several of you have reported to us during the past couple of hours. It’s currently unclear as to how many spaces are available for the beta, but at this stage, it would seem users are being selected at random.

So, if you’ve been waiting to get involved and try out iWork for iCloud beta, now could be your chance; check your email – provided it is linked to your Apple ID, of course – to see whether you’ve been lucky enough to be selected.

Registered developers will have had the opportunity to test out iWork for iCloud beta since earlier on this month, when the feature was rolled out. For those unfamiliar, iWork for iCloud optimizes the famed productivity suite for use on the Web, just like the aforementioned Office 365 or Google Drive (formerly Docs). Not only does this enable users to store and process numerous file types on-the-fly, but it also facilitates collaborative workflow – a tool seen as essential by many businesses around the world.

Apple first gave the world a glimpse of the upcoming feature at this year’s Worldwide Developers Conference (WWDC) back last month, and although software focus since has largely encircled the numerous early betas of iOS 7, it would seem iWork for iCloud is almost ready for the prime time audience.

The full email from Apple reads as follows: 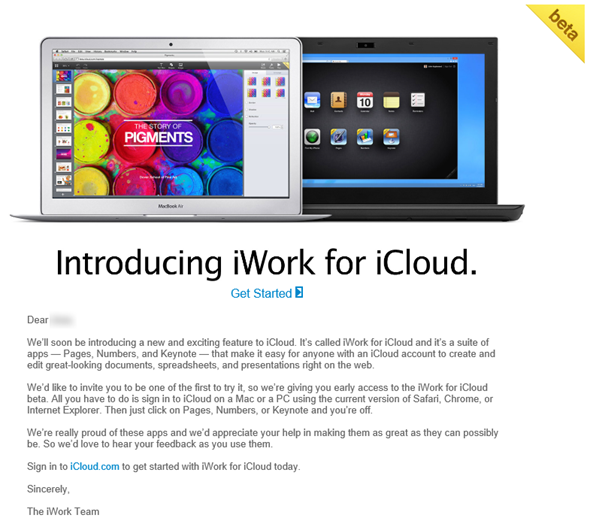 Were you fortunate enough to get an invitation from Apple to try out the iWork for iCloud beta? If do, please do leave your thoughts and opinions of it in the comment section provided below!

Thanks, Jose for the hat tip!