iTunes Back To School Deal Kicks Off With Discounted Music Albums

As the tech world preoccupies itself with soon-to-be-announced iPhone 5C and iPhone 5S, Apple has just begun rolling out its annual discounts to students preparing to go back to school. The promotion, which runs every year, sees some of the most popular charting albums reduced in price, and while it’s not exactly educational, it does enable those with presumably less disposable cash to indulge in some new music.

Included in the sale, which sees prices dropped to as low as seven bucks, are artists like Justin Timberlake, P!NK, Robin Thicke and Imagine Dragons, and while the promotion mainly focuses on the popular albums currently available, there’s an eclectic enough mix to suit even the more specific tastes.

The Back To School offer looks only to be applicable to those with a U.S. iTunes account, many of whom may already have received emails outlining the reduced prices. In total, there are around 80 titles currently available for $7-$8, with some older albums also in the offing, you don’t need to be in with the currently popular artists in order to grab a bargain.

The iTunes Store has been the cornerstone of Apple’s success over the past few years, and while now perhaps famed more for its apps than its audio content, the music arm of the iTunes Store still continues to thrive in spite of newer streaming services. For digital music downloads, it remains the undisputed king, and with plenty still stumping up the cash for iPods in a day that iOS devices rule the roost, the trend will no doubt continue. 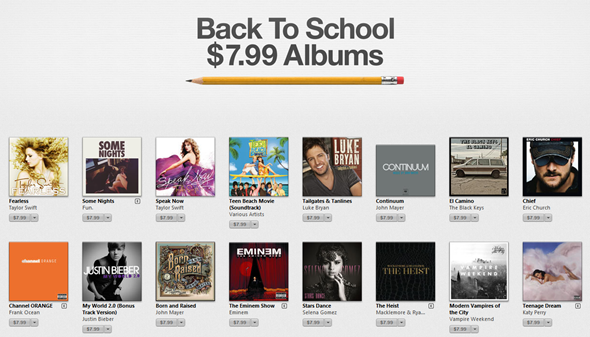 If you’re looking for more Apple savings, or are simply not interested in downloading music from iTunes, there are other promotions also going on right now, including $50 or $100 gift cards with certain Mac, iPhone or iPad purchases. This particular offer only runs until 6th September, however, so if you’re looking to take advantage of what are infrequent money-saving opportunities where the fruit company is concerned, then you had better get in quickly.

So, Back To School is now on, and if you want to grab yourself some music on the cheap, check out the iTunes Store now for the full catalog.