Although Samsung’s Galaxy S III smartphone set new benchmarks in terms of hardware and sheer power, the software features packed into the device also caught the attention of Android users far and wide. Yes, there was S Voice – the Korean company’s answer to iOS’s Siri – but some of the most significant usability enhancements were a little more subtle.

For example, a long-standing peeve of smartphone users is how the backlight of the screen can often timeout when you’re in the middle of reading a web page. Since devices set their timers exclusively on lack of touch-based interaction, you often have to repeatedly tap the screen in order to keep the light shining on your screen, enabling you to view your content without squinting.

Of course, the solution has always been to keep the backlight on for longer amounts of time, or perhaps indefinitely, but most of the time, this means one accidental touch of a button while the device isn’t in use can result in swift draining of that oh-so precious battery juice.

Samsung amended that issue with Smart Stay the Galaxy S III, and now, if you’re holding the device, the smartphone earns its moniker by staying awake for the duration. That’s all well and good for the early adopters of the quad-core offering, but it doesn’t quite help the hundreds of millions of Android users rocking an older device.

Say no more. ISeeYou, an app developed by Marco Roccagli, brings the Smart Stay idea to those running Android 2.3 or higher. There is a paid, PRO version, which allows the interval in which the front camera searches for you to be altered, while the free version doesn’t offer any customization abilities. That said, the latter iteration will probably do the trick for most, and providing your device has a front-facing camera, it will detect your face and keep the lights on when somebody’s home. 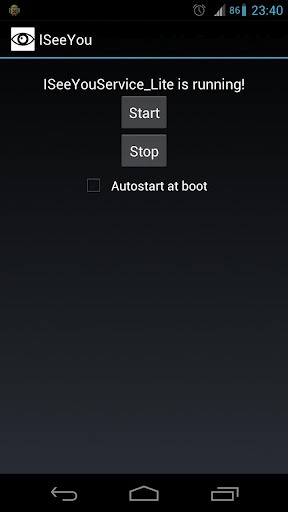 The PRO version is 99 cents, and is certainly worth the investment if you’ve had enough of your device’s display letting you down. It may take a little bit of extra juice, depending on which device you’re rocking, so my advice is to try out the free version – linked to below – for a couple of days first before parting with your cash and going PRO.