With over 4 billion people on earth extensively using cell phones, the demand for new devices has gone up manifold. There is also a major concern in the minds of 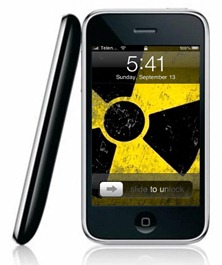 the users about the radiations emitted by these devices. Recent studies and research work shows significantly higher risks for brain cancer and salivary gland tumors, migraines, vertigo, and behavioral problems among people using cell phones. Members of Environmental Working Group (EWG) which is carrying out research on the subject, believes that until scientists know a bit more about these radiations, it will be prudent for consumers to buy phones with the lowest emissions. Giving due cognizance to this premise, the new iPhone 3GS by Apple has much better results as far as emission of EM (electromagnetic) energy is concerned than its predecessors.

SAR (Specific Absorption Rate) from a cell phone is the extent to which the user is exposed or subjected to. Radiations are harmful no doubt, and that’s why SAR limits are imposed. Speaking, from health point of view, the lower the SAR, the better a cell phone is.  Like all phones, iPhone’s also contain radio transmitters and receivers. When on, iPhone receives and sends out radio frequency (RF) energy through its antenna. iPhone’s antenna is located on the backside near the dock connector. iPhone is designed and manufactured not to exceed limits for exposure to RF energy value set by the Federal Communications Commission (FCC) of the United States and the recommendations of the Council of the European Union. The SAR limit set by the FCC is 1.6 watts per kilogram (W/kg). The SAR limit set by the Council of the European Union is 2.0 W/kg. Tests for SAR are conducted using standard operating positions (i.e., at the ear and worn on the body) specified by the FCC and the Council of the European Union, with iPhone transmitting at its highest certified power level in all tested frequency bands. Although SAR is determined at the highest certified power level, the actual SAR level of iPhone while in operation can be well below the maximum value because iPhone has a special feature that adjusts its cellular transmitting power based in part on proximity to the wireless network. In general, the closer an iPhone user is to a cellular base station, the lower the cellular transmitting power level will be.

Apple’s iPhone 3GS now has a SAR of 0.79 W/kg when held close to the ear compared to the 0.974 W/kg SAR of the original iPhone, and 1.39 W/kg SAR for the iPhone 3G – not particularly a good number for the 3G since the maximum allowed is 1.6. Apple, no doubt, has made remarkable improvement in bringing down the iPhone 3GS radiation emissions, making it far more safer for its consumers but it is still not good enough to be among the top 10 cell phone’s ranked by radiation. Another question which could arise here is that why is the SAR level of the iPhone 3G is significantly higher than that of the 3GS?  The simple answer would be that Apple has tightened up tolerance limits and the new design-level architecture improvements allows less radiation leakage. There seems to be a considerable difference in the hardware of the 3GS from the 3G. A redesigned improvised antenna, upgraded internal components and better shielding of these internal components must have together contributed to reduce the SAR of iPhone 3GS. No matter how best and how safe your cell phone is, it is still prudent to keep oneself healthy by texting more and talking less. That’s one of the tips given from Environmental Working Group for cell phone consumers. Taking advantage of high quality sound of iPhone’s loud speaker, is yet another way to reduce on radiation absorption. It’s better to be more on speaker phone, so as to keep phone it at arm’s length from your skull. In today’s world, from natural as well as man-made energy sources, we are constantly living in flood of radiations. Cutting down on your own cell phone usage, may be the only option with us to reduce radiations absorb dose to our heads at least. For those who care, be rest assured that it’s safe enough to buy and use iPhone 3GS.