Apple released final version of iOS 9.3.3 to users a couple of days ago now, with those carrying iPhones and iPads able to download the software and update all of their devices at will. As with all of Apple’s iOS updates, the general recommendation for non-jailbreak users is to carry out the update as soon as possible, but if you’re wary of iOS updates due to some botched rollouts over the last couple of years, then holding off initially might not be the worst idea in the world.

You might also want to hold off just to see whether iOS 9.3.3 is any faster, or perhaps even any slower than the iOS 9.3.2 update that came before it. 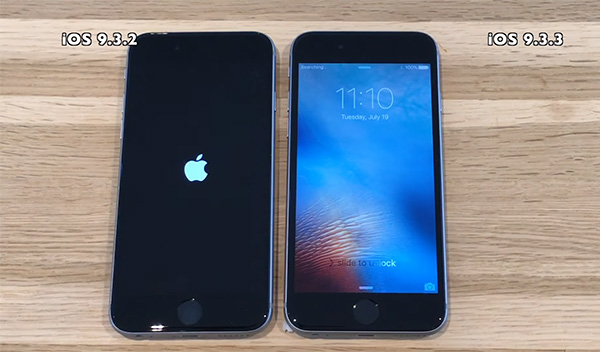 The answers, as always, are provided by these host of YouTube videos embedded below. Throughout these videos, you will find comparisons of iOS 9.3.2 to the final version of iOS 9.3.3 across a range of devices from the iPhone 4s all the way up to the most current hardware, the iPhone 6s. The reason for the comparison? Speed.

So how did things pan out? Well, the best thing to do is watch the videos for yourself, even if you just watch whichever video corresponds to the device you use, but if you really do want a spoiler, here’s what the YouTuber who conducted the test had to say on it:

Seems like iOS 9.3.3 is some what faster. It boots faster on all devices (except boot on iPhone 4s).  But over all even on the 4s apps seem to launch just that important milisecond sooner. All in all iOS 9.3.3 is a no brainer if you are on any version of iOS 9. (iOS 9.2.1 was actually pretty good, can no longer test that version, so you might want to stay on iOS 9.2.1 if you are on that today)

So there you have it. Yes, iOS 9.3.3 is faster. However, you might not want to upgrade yet from an older version of iOS if jailbreaking is something you might be interested in.