In past, we have seen iPhone being made to use in situations such as driving vehicles, controlling robots and so much more, but none a special than launching a missile! Yes, a small group of students have managed to control a missile through their iPhone that commands and controls a small rocket launcher in pre and post firing conditions. They designed an app for iPhone and created a system for the launcher by running customized version of Windows CE 6 on eBox 2300, on which the orientation, deviation and firing control of missile was possible using the iPhone. The project that successfully performed all these claimed functions was realized by David Attias, Jeff Lumish, Andrew Thoni, Greg Watkins and James Hamblen where as Nate Klein supervised it. 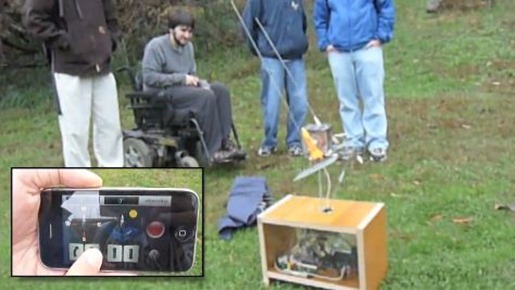 eMissileBox was part of their final year project at Georgia Tech University which is distinguished for its commitment to improving the human conditions through advanced science and technology. Here is the video of the experiment in action.

Full hardware + software specifications, demo videos and presentations can be found at the official site of this project here. [via Hack a Day]