If you combine the entire Apple and Android OS phones out there, how much market share would they take? According to the research firm, The NDP Group, that number is 82%. That’s quite a bit of the pie. 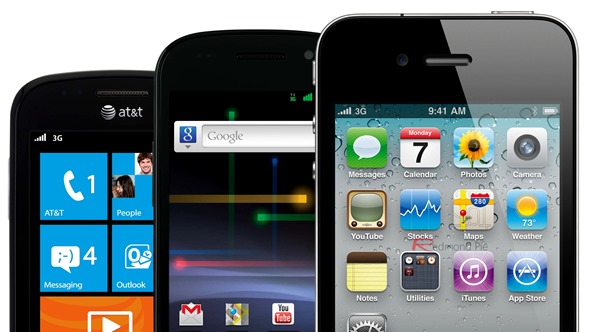 Dive further into the statistics reported and we’ll see that the Android OS is currently the leader of the bunch. Phones running on Google’s OS grew to dominate over half the smartphone market with 53%. Apple increased their IOS dominance as well, rising to 29% of the market.

This brings us to the rest. Unfortunately, not everyone can be a winner; RIM’s OS market share has declined to 11%. Windows Phone hasn’t seen double digit numbers since 2007; their current Windows Phone 7 mobile platform holds 2% of the market.

Things can change and companies are doing what they can to grow. Google has no intention of letting go of the throne and continues to push out updates and firmware to the current Android powered, product lineup.

Google has also acquired Motorola. This move will allow the giant to control both software and hardware on future devices. The deal also comes with all the patents awarded and owned by Motorola, which may be reason for the deal to begin with. A large patent portfolio makes a company strong and secure. Companies will think twice about suing for a few things; they may be sued in return for a book’s worth.

Earlier we reported on Nokia’s opinion on Android and iOS. Nokia felt that the younger generation would stop purchasing the phones running Apple and Google’s software and would try to find something better. The company decided to use Windows Phone 7.x on their phones. Although this is probably a good move, the last experienced I had with a Nokia phone was when the game Snake II existed. We’ll see if the new Nokia models with Windows Phone 7 raise the OS to double-digit market share.

Ross Rubin, the executive director for the Connected Intelligence for the NDP Group, shared some thoughts on the fate of RIM:

Few companies have felt the impact of the shift to touch user interfaces and larger screen sizes as negatively as RIM, but the company is beginning anew with a strong technical foundation and many paths to the platform.

RIM has a new product lineup that includes the BlackBerry 7 operating system. They now rank fifth among equipment manufacturers, right behind Apple, HTC, Samsung and Motorola.