It’s widely accepted that Apple’s 2016 iPhone event will be held on September 7, 2016. Members of the press and those likely to be invited to witness the unveiling of this year’s iPhone are expecting the official invitation to land in their inboxes before month’s end.

However while the date of reveal is almost guaranteed, the date of actual physical availability of the device to the public is still a somewhat contentious point. It had originally been suggested that pre-orders would be starting on September 9, 2016, with devices shipping a week later on September 16. That prediction has now been thrown into doubt thanks to a leaked AT&T retail schedule.

According to this leaked AT&T document, in-store merchandising works are to take place on September 9 and September 23, meaning that the ultimate physical release could be a week later than previously anticipated.

Of course, the leaked schedule doesn’t actually go into any granular detail about the merchandising works that are to take place through AT&T’s retail stores on September 9 and September 23, but if you read between the lines then it’s relatively simple to arrive at a conclusion that suggests marketing material could be put up in store on September 9 for pre-orders, with additional merchandising and actual devices getting displayed for September 23.

If this schedule is to be believed, then there’s no planned merchandising set for September 16, which could potentially throw the anticipated iPhone 7 release date into doubt. As a company, Apple is no stranger to allowing pre-orders of a new device to be taken for a period of one or two weeks. 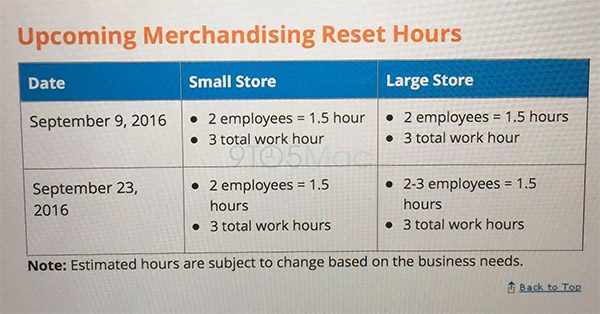 The 2014 iPhone 6 was released after a period of seven days of being made available for pre-orders. Conversely, last year’s iPhone 6s benefited from a 13-day period of pre-orders, meaning it eventually started shipping on September 25. There is, of course, always the potential that the AT&T merchandising schedule on the aforementioned dates is totally unrelated to Apple’s announcement as the Cupertino-based company is actually yet to officially announce a reveal date.

As, and when, more information becomes available, we will be sure to bring it directly to you.