Even though we’ve the distraction of two brand new consoles, Google Glass, Flappy Bird and all of the other weird and wonderful goings-on in the world of tech, the details of Apple’s next smartphone effort continue to dominate the headlines. But while most of us techies are pretty clued-in with the latest reports, speculation and conjecture, how would the general public of New York City react to a dummy iPhone 6? One group of vloggers sought to find the answer to this very question.

The one thing that has been established about general citizens is that, by and large, they cannot be trusted to make any judgments regarding an upcoming iPhone. You only have to think back to that sketch in which chat show host and serial prankster Jimmy Kimmel conned members of the public into thinking the iPhone 4S was the then-just-announced iPhone 5 for further evidence. But still, given how we’ve heard a bunch of opinions from commentators, analysts and general tech enthusiasts, what does Joe Public make of this new larger model? 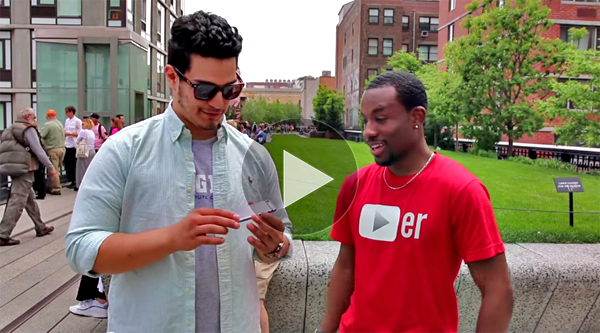 The folks of UrAvgConsumer took to the streets of NYC to showcase a dummy of the supposed 4.7-inch variant of the iPhone 6, and the overwhelming reaction appeared to be one of shock and surprise. Some noted of the sizeable nature being comparable to the likes of the Samsung Galaxy range, whilst others even went on to to suggest that it didn’t feel like an iPhone anymore. But overall, the reception was generally positive, which correlates nicely with predictions of analysts.

According to reports, Apple is planning two new iPhones for release later this year, with a 4.7-inch variant set to be accompanied by a 5.5-inch model. The smaller version is apparently slated for September, with the more sizeable handset delayed by component issues expected to arrive a month or two later, and with some significant form factor alterations including an iPod touch-like form factor and repositioned sleep / wake button, it will certainly be interesting to note the general reaction of these very consumers when all is unveiled for real.

Given that we still have a good three-and-a-half months to go before the purported unveiling, things could well change, and if any new information does come to light at any point, we’ll have it covered here at Redmond Pie.

In the meantime, check the video below, and as ever, do share your thoughts in the comments.