Moments before the official release of iOS 7 by Apple on September 18th, Epic Games’ Infinity Blade 3 was made available for purchase within the App Store. Whilst many were awaiting the arrival of this game to play through the conclusion to the mega popular Infinity Blade trilogy, some of us were eagerly awaiting this release for another reason; Infinity Blade 3 was to be the first mobile application fully optimized for 64-bit performance for the newly announced iPhone 5s.

When Apple announced that the iPhone 5s‘ A7 processor would be based on a 64-bit architecture, many skeptics took to Twitter and other outlets expressing that it’s not of huge advantage, due to the memory capacity within the iPhone 5s being capped at 1GB. Whilst that’s not exactly false – one of the main advantages of 64-bit is improved memory management – it is a bit over the top to incite that it’s a negative upgrade. Even if the iPhone 5s’ processor upgrade is as much an upgrade for the future as it is the present, there are still a number of advantages for using a 64-bit in a device with less than 4GB of RAM. AnandTech posted an in-depth report, and found that the new ARMv8 processor presented huge performance gains in a variety of different tasks. This new upgrade also encourages developers to start developing 64-bit optimized applications right now, ready for newer iOS devices that are sure to come in the future. 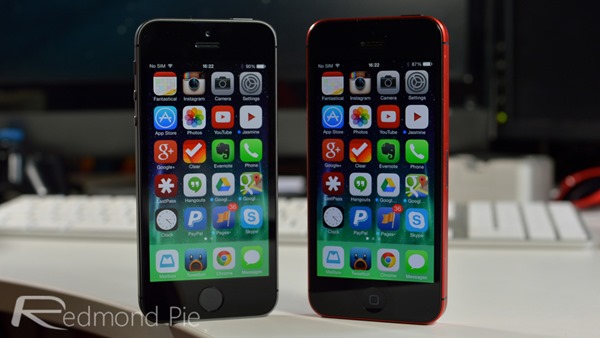 iPhone 5s on left vs iPhone 5 on right.

Now that the iPhone 5s has been out for a few days, I’ve had the chance to sit down, and experiment with how much the new 64-bit processor actually helps. Of course, I’m not exactly able to test much, it extends to a Geekbench benchmark, and playing 64-bit Infinity Blade 3. As soon as we see more developers experiment with 64-bit optimized applications, we’ll get a better idea of the capability of Apple’s new handset. For now, we’ve put together a gaming comparison comparing the 64-bit enabled Infinity Blade 3 on the iPhone 5s, and the 32-bit version of the same game running on the previous generation iPhone 5. From my time playing this game on both the iPhone 5 and the iPhone 5s, the differences are there, but are slightly minimal. The extra effects that 64-bit is being used for within this game are things like added and more realistic reflections, and additional anti-aliasing. All of this does add up, however, and playing Infinity Blade 3 on the iPhone 5s definitely feels like a more immersive experience. On certain cut-scenes and fights, it’s clear that more 3D rendering has taken place, resulting in a better looking image overall. This result wasn’t of particular surprise to me, however I’m more excited to see when and how developers will integrate this technology into their future applications.