The guys over at the YouTube channel RatedRR make a living destroying some of our favorite gadgets for fun, and having already shown the rather prectable outcome of .50 cal-meets-iPhone-5s, the gang are back causing devastation to the iPhone 5c. As most of you will be aware, the cheaper device is quite similar physically to its flagship counterpart, and aside from a few key internal alterations, the most obvious difference is the fact that it features a plastic shell. Although this is certainly a robust material, it’s no match for the .50 cal rifle of the RatedRR team’s inventory, and in something of a morbid twist, the whole event was shot using an iPhone 5s.

Although Apple fans are now, in most places, able to get their hands on the latest and greatest devices, it’s fair to say that not everybody looking to purchase one necessarily has the means or funds to do so. Thus, these videos can often be pretty agonizing, and this is perhaps a double-whammy for iPhone seekers, since we get to see one being obliterated using the refined, and frankly awesome camera of the other. 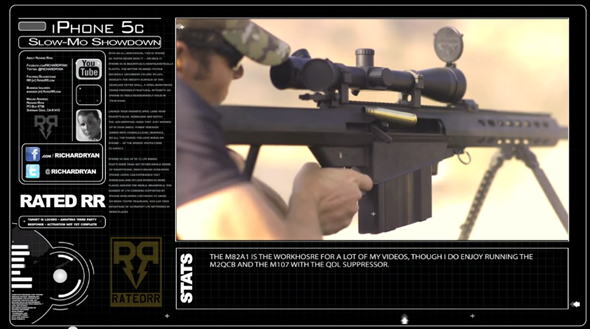 The outcome is grimly predictable, with the iPhone 5c taking a pretty savage beating. Of course, there’s not much that can stand up to such a high-caliber weapon, so we won’t be making any jibes about the polycarbonate finish.

As ever, the video is provided purely for fun and those who love guns (or seeing various objects obliterated), and although this still does send a bit of a shiver down our spines here at Redmond Pie, it’s by no means as bad as seeing that Gold iPhone 5s shot a couple of weeks back.

There is a brief bit of ruggedness testing prior to the main event of the shootout, and as well as offering a vague idea as to how tough and robust the iPhone 5c is, the entire video gives us a little look at the Slo-Mo feature of the iPhone 5s. Sure, it’s not quite hitting the frame rates of The Slow-Mo Guys and their also insanely addictive channel, but with the camera also offering better low-light performance, Apple has done a pretty stellar all-round job with its latest showstopper.