As many technology enthusiasts and bloggers will tell you, the iPhone 5 might be a bit of a disappointment. Apple may be calling it the “biggest thing to happen to iPhone since iPhone”, but I still believe that that description is for the iPhone 4 which introduced a sensational new design, considerably faster internals and, of course, the industry leading Retina display – significant improvements over the 3GS. Compared to that, the iPhone 5’s main new features include a tweaked, taller design and display, faster internals and support for 4G LTE – a wireless technology that is available only in very selected regions around the globe.

But despite all that, there is no disagreeing with the fact the iPhone 5 is still amongst the most technically able and beautifully designed smartphones today. This conflicted feeling of being both disappointed and excited is perfectly captured by a comic, we’ve posted after the jump.

The short, four-panel comic comes from the folks over at TheJoyOfTech. It shows a PC user describing their feelings of the iPhone 5 to a Mac user, calling it “just a stretched-out version of the same old phone Apple’s been making for years” and it spelling doom and irrelevance for the company after the death of founder Steve Jobs. 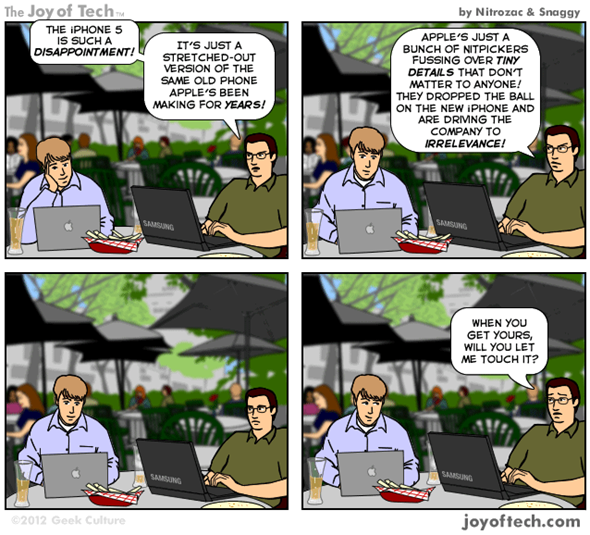 But then, in the last panel, the same character asks the Mac user if they will allow him to touch and play around with the iPhone 5 when they get it. Oh snap.

It’s something nearly every reviewer, user, owner and play-around-er has said: the iPhone 3GS / 4 / 4S is a very nice looking phone. The industrial design is just heads and shoulders above the design of plastic-ey phones like the Galaxy S III and Galaxy Nexus.

Speaking for myself and as an iPhone 4S owner, I have no intentions of upgrading to the iPhone 5. Sure, it’s a nice phone, but the jumps aren’t big enough to justify a purchase. I’ll wait for the inevitable iPhone 5S in late 2013 which will come with internal specs, and a camera that is miles ahead of the iPhone 4S.

What about you, are you upgrading to the iPhone 5? Let us know in the comments section over on our Facebook and Google+ page.