Although the iPhone 5 won’t be publicly available until this coming Friday, a number of people have started to report that their pre-ordered units have started their journey from China to their part of the world. We’ve seen this behavior in the past with Apple taking the opportunity to make sure devices are shipped well in advance so they actually do get delivered on launch day rather than leaving a trail of unhappy customers. It also makes perfect sense from a logistical point of view for the Cupertino giants to spread out their deliveries rather than attempting to deal with all pre-orders in one go.

Although users are reporting movement on their iPhone 5 pre-orders, it doesn’t mean that they are going to wake up in the morning and find the iPhone 5 sitting on their doorstep three days early. Apple is known to give explicit instructions to various courier companies to make sure that all units are held until the actual launch day before being delivered. In the past, we have seen that instructions have been either ignored or slipped through the command chain with a number of devices being delivered early.

The smartphone-loving world is alive with excitement at the minute as those lucky enough to get a guaranteed pre-order delivery for Friday wait patiently to get their hands on Apple’s new elongated device. For those who didn’t manage to get through the bottleneck that was Apple’s online ordering system last week, the excitement that comes attached to queuing up outside one of the company’s official retail stores is obviously proving too much to contain as a number of iPhone 5 queues have already started to form. 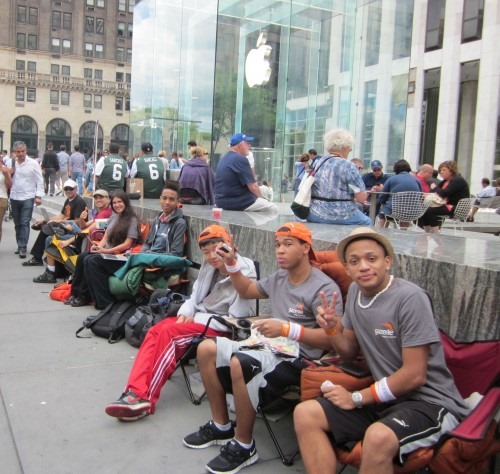 Apple’s impressive 5th Avenue Store in New York City already has a pretty notable queue outside, with reports also coming in about a number of people waiting patiently outside of the Regent Street Store in London. Companies and enterprising individuals have cottoned on to the fact that the large flagship stores will get a lot of attention as the public release date draws nearer, with a number of those queuing doing so in aid of charities or professional gain rather than an overwhelming desire to get their hands on Apple’s new hardware. As the days progress and Friday draws closer, it’s likely that the iPhone 5 fever will keep on increasing.