Apple today has announced the much anticipated iPhone 3G S with the brand new iPhone OS 3.0 for both the new and the previous gen models. The biggest question that many people are asking themselves is whether it is worth purchasing an iPhone 3G S instead of the newly released Palm Pre or the forthcoming Windows Phones with Windows Mobile 6.5?

The following head-to-head comparison between iPhone 3G S, Palm Pre and the forthcoming Windows Phones powered with Windows Mobile 6.5 will help you answer your question: 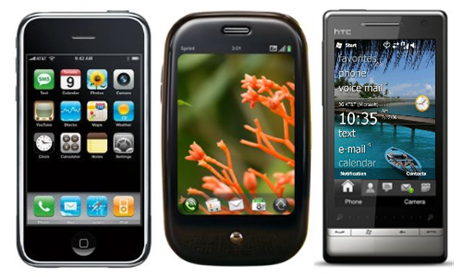 Also, while looking on the Youtube site, I have found these little comparison videos between iPhone, Palm Pre and HTC Touch HD running Windows Mobile 6.5 which are sure well worth checking out:

The Bottom line is that the competition between iPhone, Palm Pre, Android Phones and Windows Phones is good for us the consumers as this is what keeps Apple, Palm, Google and Microsoft on their toes and on top of their game. I consider myself very lucky to live in a time where we all have such awesome mobile options to choose from.

So which one will be yours come this summer?