Apple has posted the iPad mini User Guide, and if you wish to download it, you can do so by following the link embedded at the end of this post. Whenever a new iOS device hits the market, the user guide always arrives fashionably late, and while the "Fingertips" leaflet provided with said iPhone, iPad or iPod touch gives users a general idea of how to get started with their shiny new device, the User Guide offers more in-depth coverage.

The iPhone 5 User Guide released shortly after the Cupertino company’s latest flagship device, and among other things, indicated an official Lightning dock could be arriving from Apple at some point in the future. Six weeks and two more Lightning-enabled devices later, and there’s still no sign, although with third parties steadily latching onto the fruit company’s oversight, anybody accustomed to a dock at their desk has likely filled that particular void.

The iPad mini User Guide will certainly benefit those who’ve never used an iPad before. If you have – particularly if you’ve owned an iPad 2 or later – you should have very little trouble familiarizing yourself. Indeed, if you’ve used any iOS device from iOS 4 onwards, things haven’t changed enough to leave you floundering, and such is the simplicity of Apple’s mobile operating system, that even those with no experience will learn the ropes fairly quickly.

The iPad mini will serve as an introduction to iOS 6 for many, and although the Maps app has left a lot to be desired, there are still plenty of significant changes improving the iOS experience in general. With Apple having released Senior VP of iOS Software Scott Forstall, there’s already much talk of the alterations Jony Ive and Co. are set to make moving forward, but iOS 6 is certainly a lot slicker and usable than previous iterations. 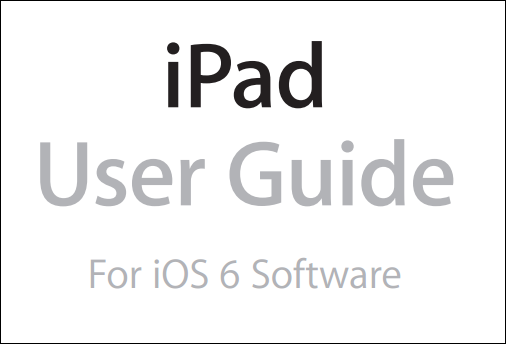 If you’re a self-professed "expert" on the iOS ecosystem, and thus think you’ll pass on downloading the User Guide, I highly suggest you swallow your pride and grab it, because there’s always a feature you’ll have missed.

If you do plan on downloading the iPad mini User Guide any way, then you can do so by heading over to this link.

Aside from all the User Guide talk, what do you actually think of the iPad mini – does it live up to your expectations? Share your thoughts via the usual mediums below!