It seems that we can’t have any big Apple product release these days without it being laden with some sort of baggage. The infamous ‘antennagate’ debacle of the iPhone 4 was perhaps the biggest blow up that we’ve seen lately, but that doesn’t mean that other products haven’t had their fair share of issues. It seems that the very recent release of the iPad mini 2 with Retina display may be the latest Apple hardware to suffer from an issue that could very well be blown out of all proportion.

Just beginning to arrive in the hands of early orderers and those lucky enough to pick one up in-store, the new iPad mini faces its first potential barrage of bad press after it was discovered that some, though not all, new iPad minis are exhibiting screen retention – something that Apple has suffered from before with its MacBook Pro lineup.

Interestingly, image retention had been rumored to be the reason that Apple’s new iPad mini would be in short supply when it went on sale, and it is beginning to seem like there may have been more than a little truth to that story. Sharp’s IGZO panels are the screens that are claimed to have a retention issue, and according to those that have used Marco Arment’s test that was designed for ascertaining just whether a display suffers from image retention, at least some new iPad minis are affected.

It’s worth noting that image retention is not the same as screen burn-in, which is something that early plasma screens were often susceptible to. Screens affected by image retention will eventually return to their virgin state, but that’s of little comfort to those who have just spent a few hundred dollars on what is arguably a defective product. 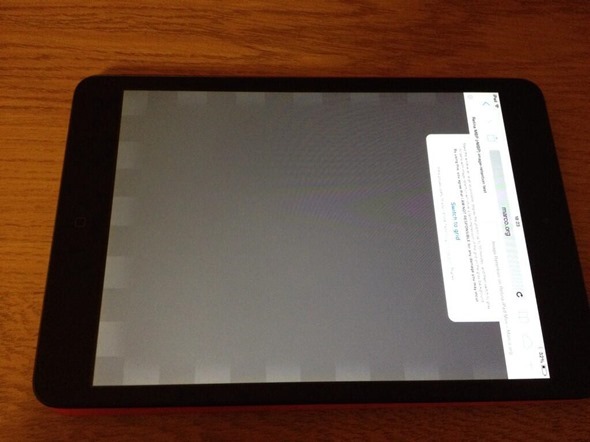 Apple’s iPad mini with Retina display went on sale just a couple of days ago and is in short supply. There is currently no way of knowing just how many devices have been affected by this image retention issue, but we’ve got a sneaky suspicion that the issue won’t be going away any time soon.

Are you facing these issues on your new iPad mini? Let us know in the comments section below.