The iPad Air 2 and iPad mini 3 have been officially announced, and the big question in everyone’s mind right now is: how do they compare to the original iPad Air and the iPad mini 2 with Retina display from last year? 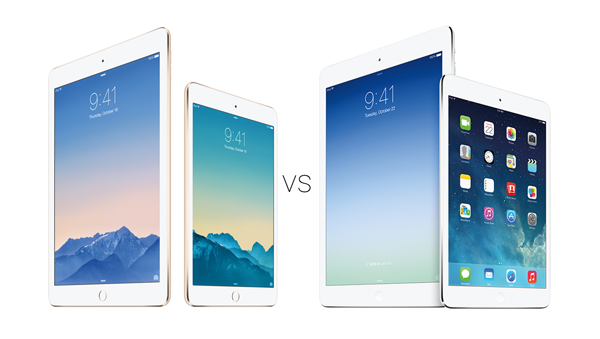 However, if you’re not bothered much about GPU intensive games, then you will find last year’s iPad Air to be a very capable tablet on its own. The two devices do seem to share the same Retina display, but the iPad Air 2 sports an optically bonded LCD, glass and touch sensor. The optical bond has not only helped Apple reduce the depth of the iPad Air 2 by 18% over the original iPad Air, but the technology reduces air gaps, giving off a sharper on-lens display.

The camera on the iPad Air 2 sees a significant bump as well, which is now an 8-megapixel affair, and is now more capable than ever before when compared to the iPad Air, with the inclusion of Slo-Mo video recording and burst photo shooting. This is specially good news for those who love taking photos and recording videos on Apple’s famed tablet.

The iPad mini 3 with Retina display however, might come as a disappointment to some, as it’s essentially the same ‘mini’ tablet from last year, but now comes with a gold color option and the famed Touch ID fingerprint sensor under the Home button.

From the camera to the processor that sits underneath the hood, the iPad mini 3 is essentially the same tablet from last year, so don’t be surprised by this year’s release just yet.

It’s also worth noting that Apple is still selling the original iPad mini at a discounted price of $249, while it’s still a capable tablet by today’s standards, but still, spending $49 extra buys you the iPad mini 2 with Retina display and a far superior 64-bit A7 processor, which is a much better option by a long shot.

While we continue to try and wrap our heads around the new iPad mini 3, it is the iPad Air 2 that has caught everyone’s attention. Have a look at the current line-up of iPad models in the chart below and make your choice which one you’d be spending your hard-earned cash on.