Now that the new iPad is finding its way into the hands of those who were either willing to stand outside their local Apple Store or to hit refresh on the online equivalent, everyone is asking the same question: just how much better than the iPad 2 is this new, third generation version?

While that’s very much a subjective question, our very own Steven Chi set about comparing last year’s iPad with the new model across a range of applications. While it is true that the new tablet’s ace card is that magnificent Retina display, the extra RAM and improved graphics processor should, hopefully, make for a more responsive experience across a range of apps. The more power-hungry games especially should see an increase in speed thanks to that extra grunt. 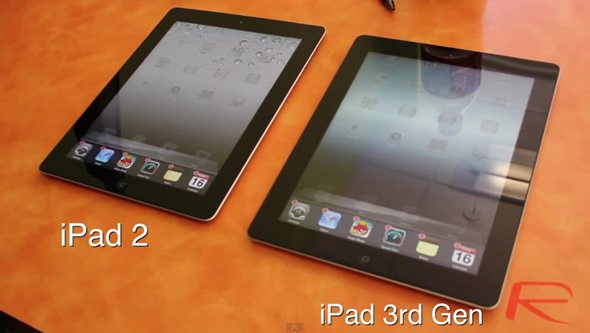 Steven compares things such as loading the Camera app, zooming in on web pages and more across his near four-minute video, and it is clear that in some situations the new iPad is indeed quicker to access applications than its older brother.

What is noticeable though is that even when the new iPad is the quicker of the two tablets, the iPad 2 is still no slouch in the processing department. In fact, we’d go so far as to say that unless either 4G or that Retina display are huge things for you this generation, there could definitely be a case to make for keeping an iPad 2 around for a another twelve months to see what the iPad 4 may bring.

Of course, that’s easier said than done, and we are all gadget freaks here at Redmond Pie. If you’re plumped for a new iPad, and from what we hear many of you have, then you’re not going to be disappointed by that pin-sharp Retina Display. Watch Steven’s video and you will notice that, especially when displaying the Notes app, the new iPad does indeed appear to offer a more colorful image than the outgoing generation.

We’ll be putting the new iPad through its paces over the coming days and weeks, so keep it here for all your new iPad news, commentary and of course, videos!