Looks like TaiG exploits were not the only thing Apple patched with its release last week. Utilities such as iFunBox, iExplorer, PhoneView, iTools etc. can no more access app directories on an iPhone, iPad or iPod touch running iOS 8.3, given the updated security settings in Apple’s latest version of its mobile OS.

As Apple tightens up known security concerns with every subsequent release of its mobile OS, it has forced developers of many file managers and transfer utilities for OS X and iOS to release newer versions of their software in a bid to offer a workaround for restoring at least some sandbox access that has since been lost.

As iFunBox puts it, “Apple blocked access of the entire sandbox directory of every installed app since iOS 8.3. Previously only writing was blocked in executable directory. Now we totally lost the control of apps on our own devices. We are investigating the situation.” Apparently, until a solution is in place, the only way to restore the sandbox access will be to jailbreak your device, but then again, there is no jailbreak solution available either for iOS 8.3.

iFunBox updated its utility over the weekend and released version 2.95, which apparently brings a partial fix to the table. All apps that have ‘iTunes File Sharing’ enabled, such as VLC player and any other file manager app, can be opened up in the sandbox environment as usual, but other apps will have to wait till a jailbreak solution is out.

Once a jailbreak for iOS 8.3 is out, it will allow OpenSSH to be installed onto the device for complete file-system privileges including command line access. This will consequently allow all iOS 8.3 devices to communicate with utilities such as iFunBox as usual, without any limitations. 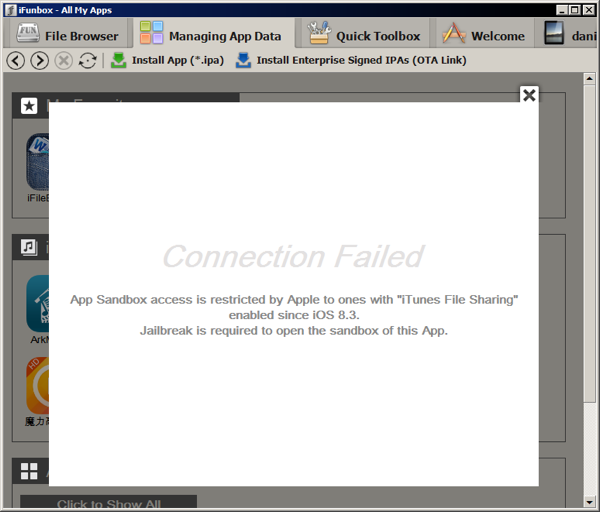 The release of iOS 8.3 has also brought in some more patches for exploits that could be used for jailbreaking the iPhone, iPad or iPod touch. Not too long ago Apple had released iOS 8.1.3 and 8.2 with some serious fixes, clearly naming the exploits being used for jailbreaking purposes that it had patched up.