iOS 7 Multitasking: Is This What Apple’s New iOS App Switcher Will Look Like? [VIDEO]

There’s little doubt that, in its current state, multitasking in iOS is very limited in terms of functionality. In fact, it’s about as one-dimensional a feature as any within the entire operating system, and with iOS 7 now well and truly on the horizon, it is something concept makers have really focused their attentions on in recent weeks. Ran Avni is yet another designer with fresh ideas of how iOS multitasking should play out in the future, delivering a rather intriguing concept which sees windows for different apps form a card-like UI.

As you will see at the beginning of the brief video clip detailing the concept, each app has its own card in what appears to be a greatly expanded version of the popular Auxo for iPhone jailbreak tweak, and also, takes a lot of design queues from the famous Multifl0w for iPhone tweak . The layout sees each card placed in grid form, with a delete button in the upper left hand corner of each card allowing you to quickly discard a window and close the app in question. As fewer apps are left open, the windows become larger to take advantage of the extra real estate, which is a rather nice, intuitive touch.

Stock multitasking is, for me, one of the most cumbersome elements of iOS in general, and this concept certainly solves most my own issues concerning this feature. Not only is everything much bigger and easy to view / organize, but with a preview of the app’s current state, you won’t end up inadvertently closing an app whilst in a middle of an unfinished task. 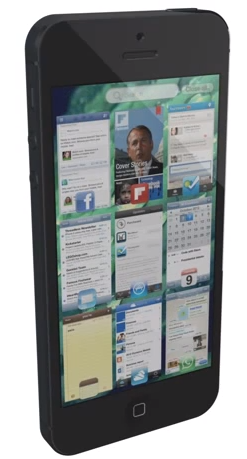 iOS 7 is expected to be announced at this year’s WWDC 2013 in San Francisco, which will commence from the week of June 10th. From what we’ve heard, it’s going to be flat throughout, with those lifelike elements such as stitching and gloss mercilessly pulled as part of a clean-up job. One hopes multitasking is also up for some big changes, and although this concept isn’t the ultimate solution (it doesn’t allow you to close all backgrounded apps at the same time, after all), it’s a marked improvement on what we have at present.

What do you think – is this the kind of thing Apple should implement with iOS 7 to step up the multitasking experience? Please leave your comments below.

Thanks, Jason for sending this in!