Apple’s very own Maps app which comes as a part of iOS 6 has been under fire for quite a while, but the decision to build their own vector-based mapping system definitely has some distinct advantages for iOS users. By using vector graphics to form the map imagery, Apple is able to hold a fairly large area of territory in memory that can be extremely beneficial to those using turn-by-turn navigation in areas where cellular connectivity is poor.

Users of iOS 6 have been quick to jump on the so-called Mapgate bandwagon, but it is fairly evident that Apple has created a mapping app that will ultimately grow into something special, even if the app severely lacks reliable data at the present time. From a technical aspect; the decision to use vector maps rather than bitmaps is definitely beneficial to the user as it allows a decent sized area to be available for offline viewing in the case of no data being available, but also, the new Maps app consumes far less data when compared to Google Maps in iOS 5.

It has also been shown that apart from actually pre-loading extremely detailed maps for extensive areas, the new Maps app in iOS 6 actually loads up satellite images and labels for major cities that are then overlaid on the vector maps for the whole globe. It is actually quite impressive and staggering when you compare this iOS 6 Maps behavior to the old iOS 5 solution that only loaded the local topography and couldn’t stitch together any satellite images that may be held in cache. 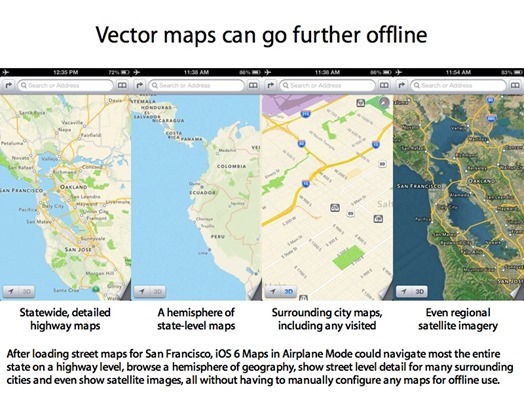 The Android Maps app offered by Google has a similar, albeit a different implementation that allows certain areas of maps to be saved for offline usage. Specific areas or regions can be highlighted and selected by the user to be saved locally on the device, but this is limited to an approximate 50 mile radius. The argument is that; Google went further by actually allowing the map area to be viewed offline with full detail, but the tradeoff obviously comes with the limited area that can be saved. 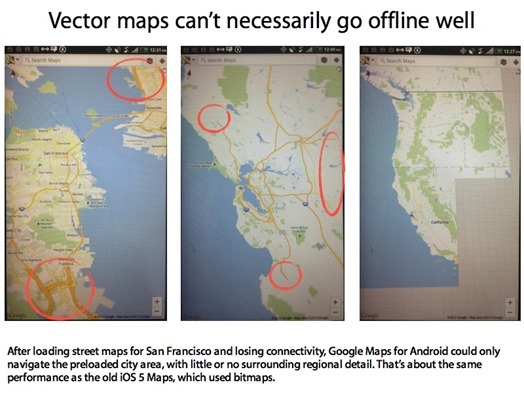 There’s no denying that Apple has a lot of work to do with the Maps app in iOS 6, and although, the app itself is technically sound with a number of fantastic and powerful features for users, there is a definite need to increase the mapping data to give users a more consistent and positive experience. Tim Cook has already issued a statement letting us know that they are working hard to improve iOS 6 Maps, but until that happens; we can rest easy knowing that the move to a vector system definitely does bring a lot of advantages.