Having only announced iOS 6 last month at the WWDC event, the Cupertino company is already meandering its way through the betas, and if you’ve a developer account, you can now download iOS 6 beta 3, linked to at the very foot of this post.

The third iteration brings the usual array of bug fixes and stability issues found in the second beta, although we’ve yet to actually test the release out for ourselves to confirm whether more have cropped up.

With a new Apple Maps app seemingly the only big new feature of iOS 6, some have been quite critical of the seemingly lackluster upgrades, including myself. Having had a play around with the second beta of iOS 6, I am somewhat disappointed by how similar it is to iOS 5, which arrived back in last October.

Of course, there’s nothing actually wrong with iOS 5, so, you might ask, why the need for a significant overhaul? Aside from not paying enough to the various useful tweaks offered by the jailbreak community, iOS has become something of a bore to look at. Functionality should always be the first priority, but iOS has been the smoothest mobile OS since it first came out, leaving Android in its wake in terms of a seamless experience, and thus, I firmly believe iOS is in grave need of some vanity house upgrades.

You may disagree, but having looked at an almost unchanged UI for in excess of five years, I’ve become more and more enticed towards the works of Windows Phone, and am looking keenly to see how the new wave of Windows Phone 8 fare in the market when they do arrive sometime later this year.

As always with pre-release betas, there will likely be plenty of sources online offering the IPSW of iOS 6 beta 3, but with Apple constantly looking to cause problems for those running betas on unauthorized devices, it’s not really worth your while checking the various torrent sites. It only costs 99 bucks to sign up as a developer on iOS Dev Center, and if you are interested in the construction of iOS enough to download a fragile beta, perhaps it is time you invested in the legitimate package. 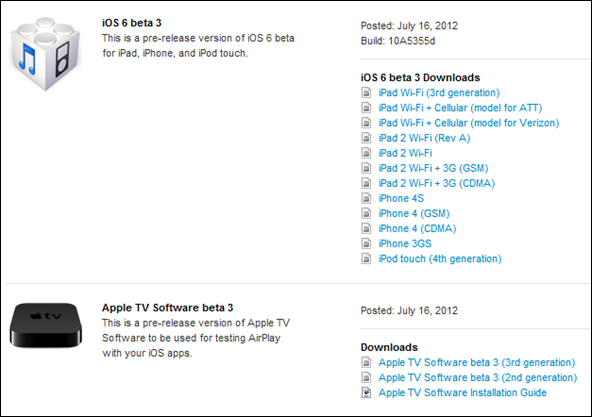