If iOS 12.2 is an accurate window into the future of Apple’s plans, then it appears that the ECG functionality could be extended to additional countries with the release of watchOS 5.2.

At the time of writing, the ECG functionality is only available to Apple Watch Series 4 owners in the United States and has already managed to make headlines by identifying and diagnosing heart arrhythmia in those who wear it who may or may not have discovered their condition without having Apple Watch and this functionality in their life.

The idea of this being extended into the United Kingdom and other countries is undeniably exciting and could likely be the catalyst for a new wave of customers choosing to upgrade to Apple Watch series 4 from an earlier model or actually embracing Apple’s wearable for the first time in order to get access to the feature.

As part of the iOS 12.2 update, a number of Apple Watch Series 4 owners outside of the United Kingdom have noticed that there are new screens in the Watch app which pertain to the ECG feature. 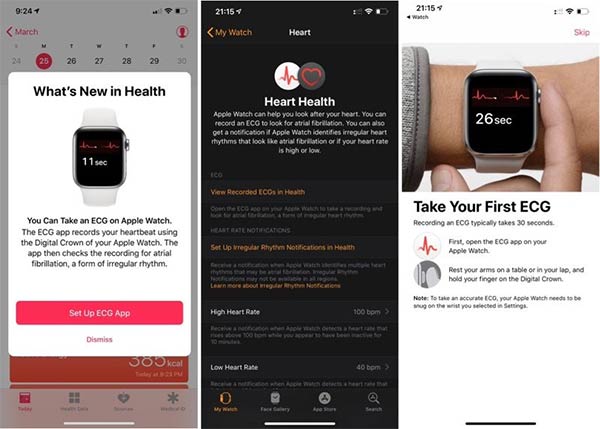 Most notably, one such visual shows a picture of Apple Watch with typical ECG iconography on the display and contains the headline “You Can Take an ECG on Apple Watch.” Unfortunately, this is as far as it goes as the ECG app isn’t accessible. It’s very likely that Apple Watch needs watchOS 5.2 to expose the required app, meaning that the ECG functionality should be accessible as soon as that firmware drops.

It seems nailed on that watchOS 5.2 will unearth this functionality for additional countries. However, the unknown player in this scenario is knowing exactly when watchOS 5.2 will actually be released into the public domain. It’s also interesting to note that Apple has yet to update the list of available countries for the ECG functionality but it’s reasonable to assume that this could happen with a simple flick of a switch once watchOS 5.2 is pushed out for general consumption.