Here are iOS 12.1 release notes, changelog, security content details that you need to know about as an iPhone or iPad user.

One thing that Apple prides itself on is its ability to continue to deliver value to consumers in the form of consistent and regular firmware updates for its devices. With the release of iOS 12.1, that commitment is clearly continuing, with iPad and iPhone owners now able to benefit from the latest changes. Now that it’s out in the wild and available for public consumption, we’re going to take a look at the release notes and security content of Apple’s latest release.

It’s worth noting that iOS 12 feels like it has only been with us for a relatively short period of time but this is already the second update, following on from the release of iOS 12.0.1 earlier in October. iOS 12.1 has been in a pre-release state for a decent period of time, which has given testers and developers an opportunity to put it through its paces ahead of this release. Because of that beta period, we have a decent understanding of all of the changes, improvements, and feature additions made with this version but we also get to see it written down in official release notes coming directly from the horse’s mouth, so to speak.

So, we know what you’re thinking, just tell us the changelog already so we know what to expect with iOS 12.1. Well, your wish is our command, so here it is, direct from Apple: 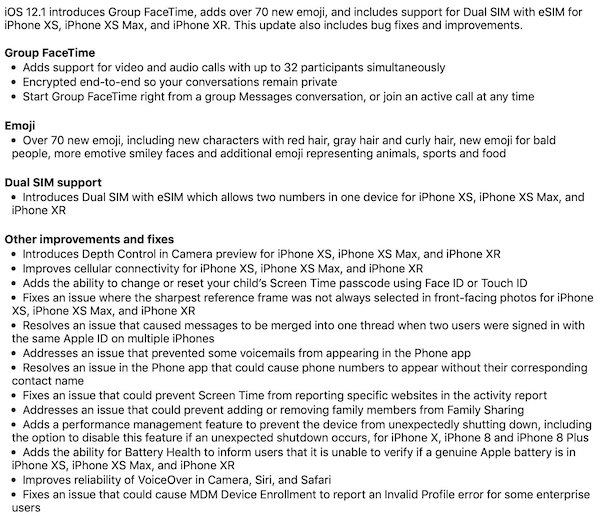 This gives an immediate overview of everything that’s new in iOS 12.1 and exactly what you can expect when you go through the installation process. It includes Group FaceTime, amends to the Camera app to offer real-time blur effect altering, and even immediate support for dual-SIM via eSIM functionality within Apple’s modern devices thanks to the electronic Apple SIM technology that Apple has been pioneering. From a security perspective, users can also expect the following from iOS 12.1:

Hopefully, the above should be enough information to either convince you to download iOS 12.1 or prevent you from getting involved with Apple’s latest release.