With Apple seeding iOS 12 beta 5 to developers a little over 24 hours ago, at this point, we are learning a few things here and there about what was added to the new release.

One of those additions has confirmed an existing rumor about the HomePod of all things, with iOS 12 beta 5 revealing that the HomePod is set to receive the ability to make phone calls.

Likely to arrive as part of Apple’s big software updates that are set to be released this September, the ability to make phone calls from a HomePod is something that should arguably have been part of the speaker’s feature-set from minute one but for some reason eluded Apple. Rumors of the feature being tested with Apple employees have been circulating for a little while now and this latest beta release adds further fuel to the fire after it was discovered that the personal requests user interface now includes provision for allowing phone calls to be made, as noted by 9to5Mac.

The personal requests setup UI for HomePod now includes a fourth icon, for the Phone app (the icon is blank in the screenshot because that app is not available in the simulator, where we’ve been able to activate this new UI). On the same screen, it describes some of the personal requests you can make to HomePod: “…add reminders, create notes, make phone calls, and more”.

There is, of course, no public or indeed private beta for the HomePod software, so this is a feature that cannot be tested until September, but the fact that the iOS portion of the special sauce is now in place should allay any fears that the previous rumors were bunk.

If you’ve been holding off buying a HomePod until it could be used as a giant speakerphone, your time to buy one may be upon you. 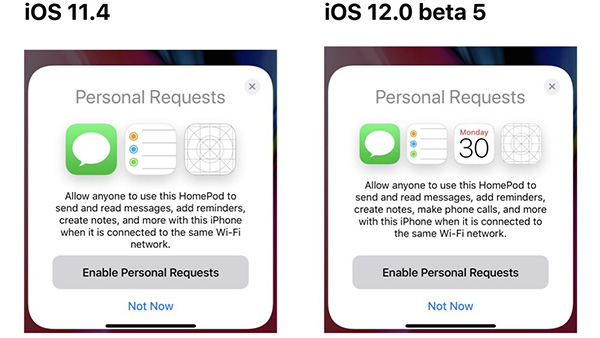