Apple has released a new iOS 10.3.2 beta 5 seed to both to registered developers and those registered on the public beta Program, which ultimately means that the inevitable speed test videos have emerged.

In all honesty, giving the minor status of iOS 10.3.2, we would have expected it to be out already with a public release in place, but Apple does seem to be stretching it as far as possible for one reason or another. If you’re interested to see if any improvements have been made with this beta, then you have come to the right place. 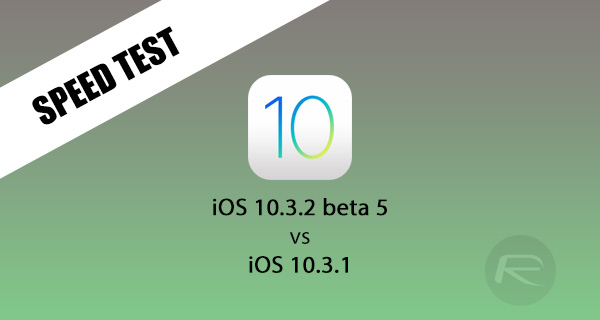 As always, the video tests from YouTube channel iAppleBytes focuses on taking a number of different Apple devices and installing iOS 10.3.1 and iOS 10.3.2 beta 5 on them all. The purpose being to pit the two software versions against one another on the same hardware to see if there are any notable differences in performance levels between the public version (iOS 10.3.1), and this latest beta (iOS 10.3.2 beta 5). And as always, this is achieved by focusing on how the devices perform on bootup, as well as how capable the firmware is at a speed of execution standpoint when it comes to launching apps.

So, without further ado, let’s jump in and see exactly what’s going on with iOS 10.3.2 beta 5. With iPhone 5, it seems that iOS 10.3.1 is noticeably quicker to boot to the Home screen. iOS 10.3.1 is also more performant in the bootup stage on iPhone 5s, iPhone 6, and iPhone 6s, but only very marginally on those other three devices, coming literally a fraction of a second ahead of iOS 10.3.2 beta 5. Still, it’s a good indication that Apple definitely has made speed improvements with its latest proposition when it comes to getting past the bootup process especially when compared to iOS 10.3.2 beta 4.

And the rest of the test is actually a very similar story to what we have seen previously. Both versions of iOS are capable of invoking a range of stock apps with a nearly identical performance level. There are slight differences when it comes to loading up menus within apps, such as invoking the native sharing menu, which is slightly faster in some instances on iOS 10.3.2 beta 5, but on the whole, both versions of iOS offer a very similar and expected performance from an app perspective. On benchmarks too, iOS 10.3.2 beta 5 scores minor improvement over iOS 10.3.1 and 10.3.2 beta 4.

With this being beta 5, it can only be a matter of time until Apple issues the public release.

Till then, check out the series of videos below and let us know what you think!