Apple is universally recognized as a company shrouded in secrecy, and as well as keeping upcoming products and ideas firmly under wraps, the “Apple University” remains an enigmatic training camp for talented minds. Just like any ordinary university, there’s a certain code of conduct and etiquette that students must follow, but as you might imagine, the Cupertino tech giant operates a little differently from your typical academia. Given, as aforementioned, the hush-hush nature of Apple University, it’s somewhat rare for the public to get an insight into what goes on, but three students have stepped out and offered a glimpse of what it’s like to study through Apple’s prestigious program.

Established by late co-founder and CEO Steve Jobs back in 2008. The culture of Apple University, headed by Apple HR VP and former dean of Yale School of Management Joel Podolny, is unconventional, but at the same time, quintessentially Apple. For example, the ‘Picasso’s Bull’, which sounds rather grandiose by its name alone, consists of eleven lithographs, and sees the master artist deconstruct a bull down to its most basic form. 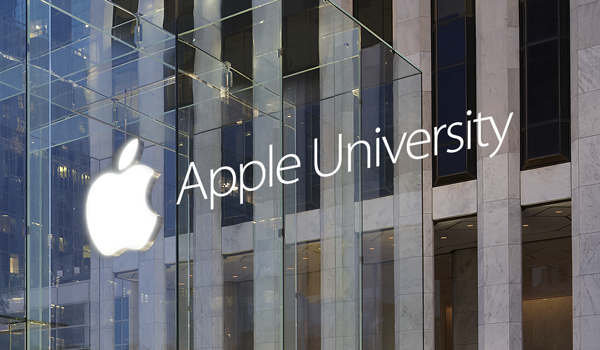 It’s a bit of a head-scratcher, to say the least, but with Apple’s attention to the smaller details in every product it creates, a necessary approach that helps to mold students into the Apple thought process and ethos. As we’ve seen time and again, through the numerous products designed by the likes of Steve Jobs and Jony Ive, Apple does nothing by half measures, and students will sit a bunch of classes similar to the Picasso’s Bull as the Mac maker’s mindset begins to rub off.

Apple even uses the products of rivals in order to portray the benefits of simplicity over complication. For example, students will mull over a Google TV remote with some 78 buttons, and compare it up against the Apple TV version, which includes just three. Although, as an Apple TV user, I do find the navigation of the UI to be far from seamless compared with, say, iOS or OS X, the minimalist approach is definitely one that has garnered the company millions of fans, and even though Steve Jobs may no longer be with us, his legacy remains through programs such as Apple University.

Incidentally, though, Jobs’ decision to port iTunes over to Windows is used in a case study, symbolizing how the move helped to spur the popularity of the iPod and iTunes Store in general. It seems, looking back, like such a minor thing, but when you consider Apple’s stake in the subsequent smartphone and tablet markets, it was definitely a major turning point that has helped the company reach the position it finds itself in today.

The full profile on Apple University, which is well worth a look, can be read over at NYT.