The rumors of some sort of Facebook phone arriving sometime in the future have been circulating for a while now, with HTC being touted as a hardware partner. Now though it seems minnows INQ are hard at work getting ready to bring a handset to market. 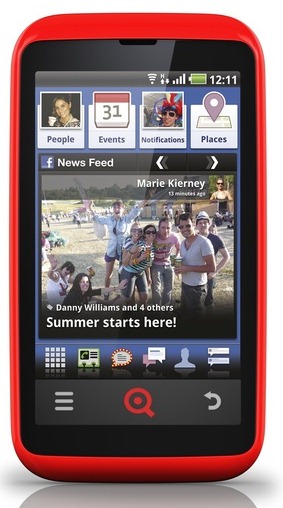 British firm INQ sent channel manager Andrew Bennet over to TechCrunch’s officers to give them the scoop on the INQ Cloud Touch, a smartphone running a heavily modified version of Google’s Android.

According to the TechCrunch article and indeed the video they posted, it’s clear that this is more than just an Android handset running the Facebook app. The entire experience is very tightly tied into the Facebook system, with the homescreen showing your friends’ activity stream front and center.

Other integration includes apps such as the phone’s calendar. Here the OS pulls not just your upcoming events into a calendar, but also those of your friends, as well as birthdays. Perfect if, like me, you tend to forget just about everyone’s birthday!

Perhaps the real bombshell is the integration with Spotify. The European music streaming service is the main media manager on the INQ handsets which is great news for those of us able to access the service. Thankfully, reports are that Sporify is close to securing a deal allowing the service to be made available state-side. Until then, Spotify will just work as a standard music player instead of a streaming service.

INQ are aiming for a May launch for their Cloud Touch and Cloud Touch Q (which is the same handset but with a QWERTY keyboard) and as yet aren’t saying what we should expect to pay, though it’s not expected to be marketed as a premium handset. In other words – cheap.