Increasing availability of iPhone X at Apple Stores around the world suggests that Apple is getting a handle on the production and distribution of its new flagship smartphone.

It’s now been three weeks since iPhone X was launched into the public domain, with customers all over the world struggling to get their hands on the device in local retail outlets. With shipping times having improved gradually over the period, now, Apple’s in-store availability tool is showing walk-in supplies in many Apple Stores in major U.S. cities.

Potential consumers in the United States and Canada appear to be the main beneficiaries of Apple’s new-found stock levels. Retail Apple Stores in Chicago, Los Angeles, Phoenix, San Francisco, and Philadelphia are all showing stock available for walk-in and collection. From a Canadian perspective, major Apple Stores in Calgary, Edmonton, Ottawa, Quebec City, Toronto, and Vancouver are also stocking iPhone X to be ordered and collected today. According to analyst Gene Munster of Loup Ventures, iPhone X availability has risen to 16 percent from just 2 percent in the last seven days.

The aforementioned Apple Stores in both the United States and Canada may now be stocking the device for walk-in customers but availability will differ by store and stock levels may not cater to everyone’s needs and desires. Stock varies by configuration, aesthetic finish, and carrier, meaning that your own personal itch could be scratched if you hit the lottery, or you could be left waiting for Apple to continue replenishing its stock levels and get in the exact device that you are after.

Those who have been interested in iPhone X, and who have been constantly checking Apple Retail on a daily basis, will be well aware that stock levels can also fluctuate during the day. Many of Apple’s retail outlets will take delivery of new stock at 6 A.M. each morning, which is when the inventory and availability levels will be updated. 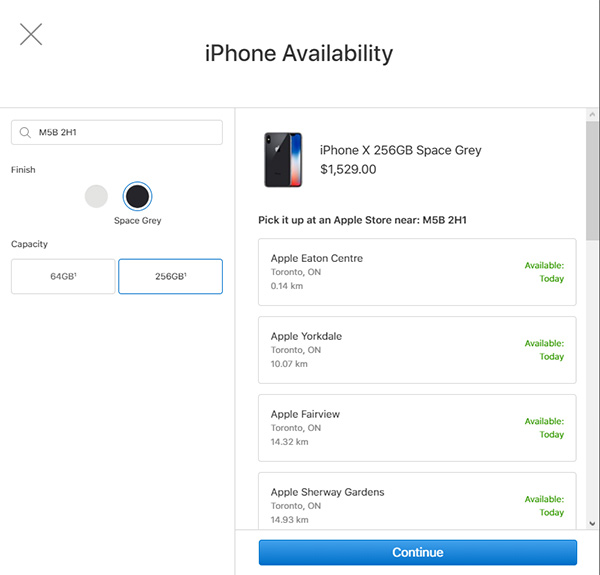 However, history has shown us that it doesn’t take long for that stock to be depleted. If you are interested in iPhone X, and are desperate to get your hands on Apple’s new flagship, then we recommended checking the Apple Store app periodically to check for stock in your nearest Apple Stores, and even calling the store directly to get an update on stock levels and availability for the configuration of your choice.