Apple has taken a fairly big step forward in terms of LTE speeds and performance with iPhone XS and iPhone XS Max. However, according to a report and investigation by PCMag, Apple’s new 2018 iPhones are still lagging behind Samsung’s Galaxy Note 9 and its Qualcomm X20 modem.

Most consumers will purchase a device based on how it looks and feels as well as taking on board the marketing and PR spiel that the company pushes out. With iPhone XS and iPhone XS Max, Apple has tried to take the next step forward from an LTE speed and performance perspective by utilizing a brand new modem called the Intel XMM7560.

This is the first Intel model that actually supports all four wireless networks in the United States and has allowed Apple to move away from the Qualcomm chips that have previously been used. It’s a big step forward from Apple’s previous smartphone, the iPhone X, but doesn’t quite match the capabilities of the Qualcomm modem used in the Note 9.

The tests used in the PCMag investigation used a 20MHz channel of Band 4, which is the exact same configuration as used by AT&T, T-Mobile, Verizon, and all of the major wireless carriers that are currently operating in Canada. Apple’s adoption of 4×4 MIMO antennas means that the iPhone’s LTE speeds have been doubled in good signal areas but also improved when the signal is weak:

The first thing you see is the effect of the new 4×4 MIMO antennas. In good signal conditions, they double the phone’s speeds, but they also help in weak signal conditions. Apple was the last major manufacturer to adopt 4×4 MIMO, and it was desperately needed. 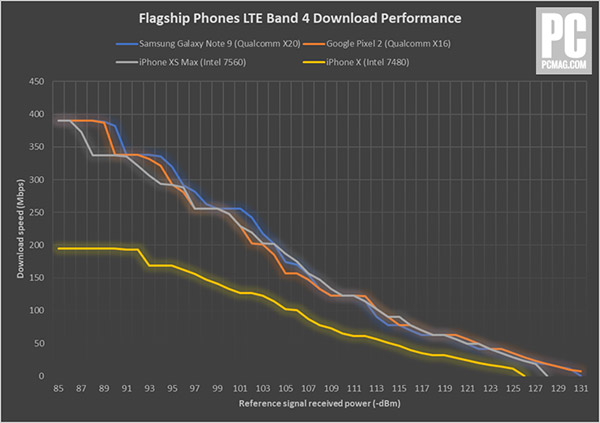 The outlet also tested iPhone XS Max against two other 4×4 MIMO devices in the Galaxy Note 9 and the Google Pixel 2, showing that both of those devices perform better than Apple’s hardware under those conditions:

Between the three 4×4 MIMO phones, you can see that in good signal conditions, the Qualcomm-powered Galaxy Note 9 and Google Pixel 2 still do a bit better than the iPhone XS Max. But as signal gets weaker, the XS Max really competes, showing that it’s well tuned.

It seems that Apple has made significant internal improvements over its 2017 hardware but still has some improvements to make before it competes with and surpasses Qualcomm-based hardware on the market.