Apple’s iPhone XS and iPhone XS Max are closing in on their first full week on sale, and both have been largely well received by both the press and buyers around the globe. There are always teething problems with some handsets, but by and large, things have gone swimmingly. There are two new reports out that show how things can go well and not-so-well for a newly released handset, however.

We have already seen LTE speed tests coming out of SpeedSmart, and now we have Macworld chiming in with their own result of a WiFi and LTE speed test. While both the tests are seen with varying degrees of improvement, it’s clear that the improvement is there in some capacity. Macworld notes that both WiFi and T-Mobile cellular speeds saw significant improvement when compared with last year’s iPhone X.

From inside our office building in downtown San Francisco, six floors up, we can see that our Wi-Fi download speed is only a little faster, but upload speed is improved over 45 percent. 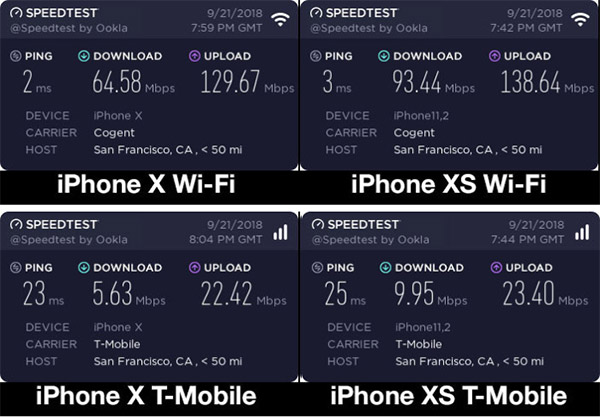 The results found by SpeedSmart were even more impressive, perhaps further highlighting that carrying out a real-world test will never be 100% indicative of what everyone will experience thanks to the sheer number of variables involved.

The not-so-good news comes in the form of Tom’s Guide tests showing the battery life users can expect from an iPhone XS and iPhone XS Max. Apple had said that the former would offer 30-minutes more battery life than an iPhone X while the latter boasted an additional 90-minutes. However, according to the tests, things didn’t quite pan out that way. 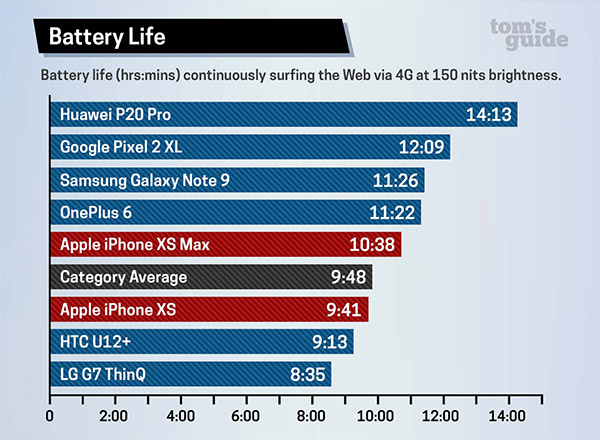 The iPhone XS Max turned in a run time of 10 hours and 38 minutes, which is well above the smartphone category average of 9:48. However, the iPhone XS lasted for just 9:41, which is slightly below the average. Last year’s iPhone X lasted 10:49 on the same test, despite claims from Apple that the iPhone XS was supposed to last 30 minutes longer.

As always, your mileage may vary!