Apple has recognized the ongoing needs of its iCloud users using alternative desktop operating systems. The Cupertino based company has officially released an updated version of iCloud Control Panel offering Windows 8.1 support and taking the software to v3.1. Microsoft’s latest update to Windows has been with us since the middle of October, bringing with it a number of important aesthetic and functionality based changes and improvements. Apple’s latest launch of its updated iCloud Control Panel signifies the company’s commitment to those who prefer to use Windows over its own OS X powered Macs.

The amendments to the Windows variant of the iCloud administration tool are extremely minimal in version 3.1. The majority of the development time has been spent ensuring that full support is included for Microsoft’s new Windows 8.1 offering. The current latest version of Microsoft’s desktop operating system features a number of internal changes, meaning that third-party developers like Apple have to put their wares through thorough testing to guarantee everything is in place and working correctly. Version 3.1 of the iCloud Control Panel also offers integration with Microsoft Outlook, in that it automatically signs users into the app. 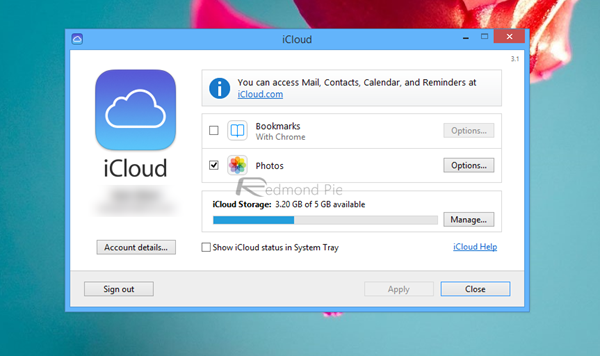 Apple’s iCloud Control Panel has proven itself to be a very popular install on Windows 8 powered PCs. The software is Apple’s way of affording users a relatively seamless way of controlling and managing various aspects of their iCloud account through a computer without needing a Mac. The software does have limitations, and it’s only intended to be an administration tool to manage an existing iCloud account. Users still need to have an iOS powered device running iOS 5.0 or above or an OS X based machine to initially create the iCloud account. 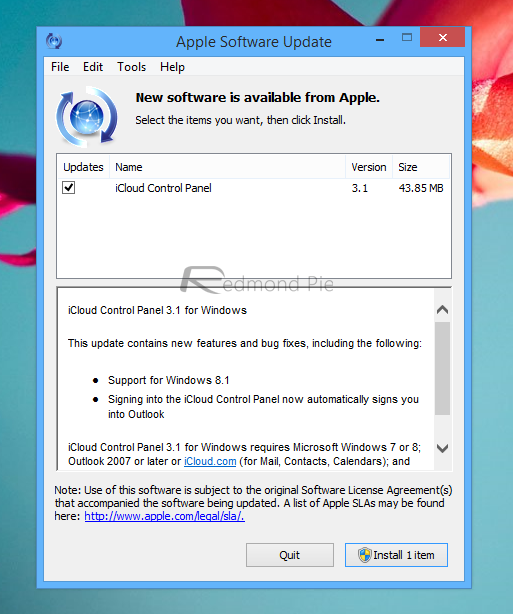 If you’re a Windows user who wants to keep email, contacts, bookmarks and calendars in perfect harmony between devices then it’s likely that the software will be of great use to you. Users who are currently running Windows 8.1 and have the iCloud Control Panel installed can grab the update directly from Apple’s Software Update app. Alternatively, if you’re a new user, then you can grab the iCloud Control Panel app directly from Apple’s website.

It’s highly recommended that you update to the latest version of the app to ensure that you get the most seamless experience out from iCloud.