With the PlayStation 4 set to be released within the next 24 hours and the Xbox One hitting the retail market next Friday, the console fanboys are out in full force, offering lopsided, oft baseless reasons why one is better than the other. Never one to hold back when it comes to making a joke of things, the creators of South Park have put together a scene in this week’s episode dedicated to the next-gen battle, with heavy reference to the Black Friday sales beginning next week. As can be seen online in YouTube comments, on forums and other such mediums, an innocent debate quickly descends into a fanboy flame war, before ending on a typically offensive note. Check it out after the break!

The U.S. release of the PlayStation 4 will commence from tomorrow, prompting a frenzied scrum of gaming fans to queue for Sony’s latest and greatest machine. In at a week earlier and one hundred dollars cheaper than its close competitor, it certainly has something of an advantage over the Xbox One on paper, but try telling that to those fanboys! 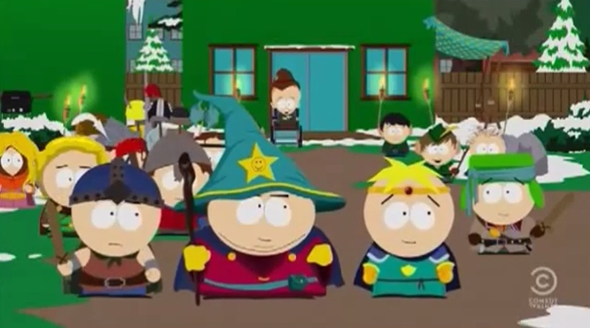 This week’s South Park, entitled "Black Friday," also contains an abundance of Game of Thrones references, and with the characters going out in full get-up to queue for the PlayStation 4 – or so they thought – the group begins to divide as certain individuals reveal that they actually want to grab the Xbox One.

As ever, things quickly get out of hand. Kyle, who is clearly in the market for Microsoft’s console, reminds Stan that the PlayStation 4 doesn’t offer "the seamless transition between games, movies and TV offered by Xbox One," but this is countered by Stan with reference to the touchpad of the PS4.

I love how South Park always manages to hit the nail on the head, and as with any heated debate among fanboys, it ends with the rather infantile comment of "Let these Sony ****s wallow in their limited voice-control functionality."