Now that WWDC is just around the corner, all eyes are very much on what Apple will be announcing when Tim Cook and his band of merry men take to the stage. While we’re all supremely confident that iOS 8 and Mac OS X 10.10 will be revealed at the event thanks to new banners being erected over the last day or two, other details are largely unknown. Rumors leading up to this point had suggested we might see a new product category appear, but that’s now looking unlikely.

Which is a shame really, because the iWatch was tipped to be that new product that would make an appearance at WWDC, with some expecting it to be the big driver for Apple’s whole event. With that now looking increasingly unlikely, we’re left to enjoy parodies of Apple iWatch unveilings instead, with one in particular catching our eye. 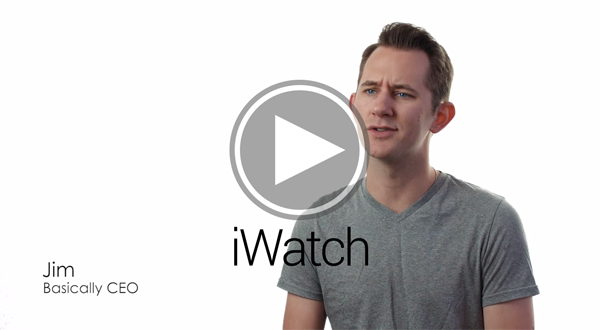 YouTube channel ‘Matthias’ has posted a fully three-minute video that takes the tried and tested Apple product announcement videos and uses them to create their own parody. Basically, imagine three minutes of comedy while fake Apple engineers talk about the iWatch. We’re not going to spoil it for you, just watch the video yourselves, and believe us, they’ll be 3 minutes of your life well spent, if you’re into this sort of thing, which we’re assuming you are.

The real iWatch isn’t even guaranteed to be a real thing at all, but at this point we suspect that the rumors have just been ticking along for far too long for Apple to not have something up its sleeve – if you’ll pardon the horrendous pun. Expected to tie in with iOS 8, the iWatch being announced at WWDC did make a lot of sense, but the word on the street right now is that there will be no big hardware announcement with Apple preferring to instead focus on the iOS and OS X operating systems instead.

Of course, if the iWatch does show up on Monday morning, can we all just agree to ignore everything we just said?