If you’re a Windows Phone user, then a lack of apps, or at least quality apps, is something that you’re no doubt very familiar with. It’s a shame, because the Windows Phone experience is a very good one, but the platform just doesn’t boast an app ecosystem like either iOS or Android, and it’s putting people off.

One app that’s currently conspicuous by its absence is Hulu. The video streaming service that’s hugely popular amongst many does not currently offer a Windows Phone app, meaning those using handsets powered by Microsoft’s mobile operating system are out of luck. Owners of iOS and Android phones do have access to Hulu thanks to bespoke apps, leaving Windows Phone as the only major smartphone OS without Hulu.

Well, fans of Windows Phone and Hulu may not have to wait forever to get their Hulu fix on their smartphones, after Hulu’s own customer support team suggested that a Windows Phone app is in the works and, more importantly, it may not be too long before it ships.

According to an email from Hulu, a Windows Phone app is set to be released in the near future thanks to the fact that the company receives lots of requests for Hulu on the platform. 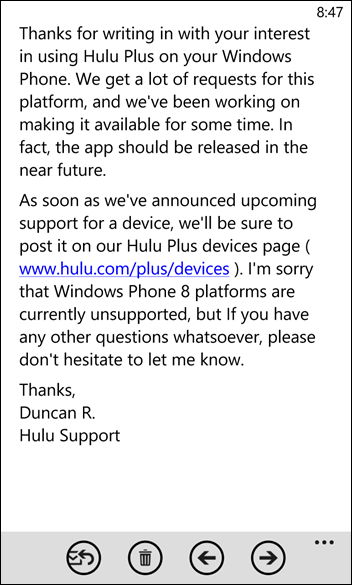 Hulu recently released Hulu Plus for Windows 8, and a Windows Phone 8 app is believed to be in the works as an offshoot of that.

We’re not going to lie – Hulu isn’t the biggest app we long for on Windows Phone, but if you’re a big fan of the streaming video it provides then this news will no doubt be welcome. We’d prefer to see apps like Instagram come to the platform, as well as a better selection of games akin to that offered by Apple’s iOS. Until the developers decide to give Windows Phone some love though, there’s not much Microsoft can do. They’ve already paid companies to develop apps for its platform, but that’s apparently not quite enough!

Still, Hulu’s a start, and it’s one less app that switchers will be left without after making the jump to Windows Phone.

Are you excited about the news? Why not share your thoughts with us in the comments section?